I finally took posession of my GSG 1911 .22LR that I purchased from www.blueline-activities.com about a month ago, haha!  It wasn't their fault as the hold up was with the CFO.  I heard that the CFO has been seeing a lot of lay-offs as with many other government departments so I can't fault them for the delay.  Either way, I was pretty happy to finally take home my new toy.  On the way home from Blue Line, I stopped in at DVC with my buddy Jay to break in the new addition to the family. 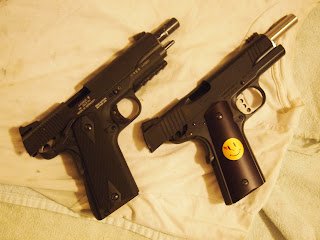 I took some really crappy pictures of the GSG here, sorry for the poor quality.  I just threw it on a rag along with my Remington 1911 R1E for comparison. 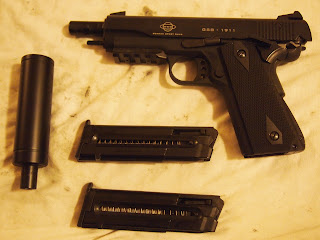 The GSG came with one mag, the fake can and an accesory rail already attached. 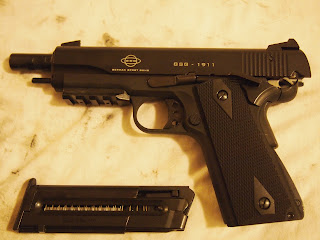 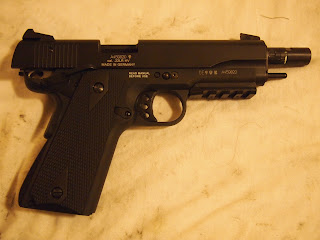 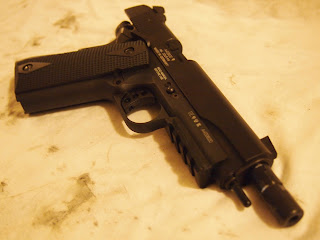 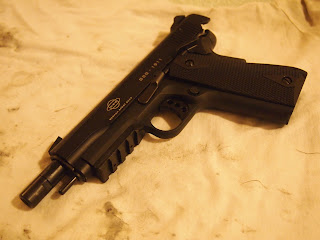 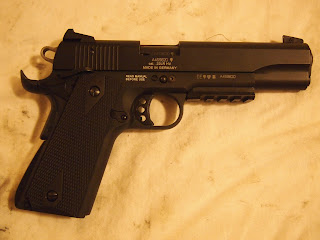 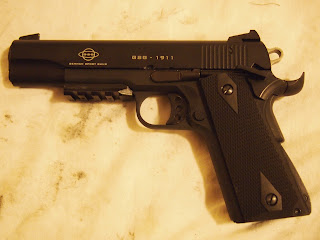 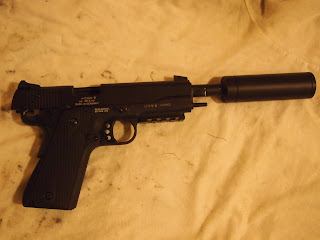 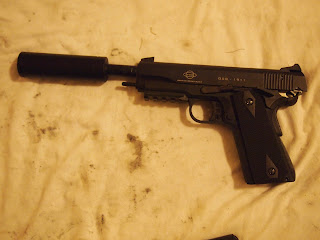 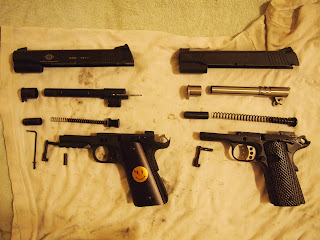 I thought the field strip was going to be a pain, but it turns out that the only major difference was a hex screw and an additional retaining pin.  There's a Colt Gold Cup 1911 in .22LR but that one is a bit different in that the barrel stays attached to the lower receiver after the slide is removed.  For that reason, I like the GSG better because the take-down procedure is more in line with a standard 1911 in .45ACP. 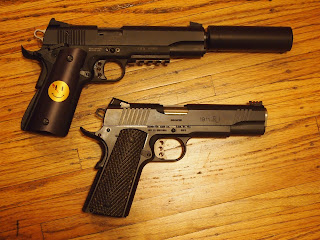 I swapped the smiley face Watchmen grips from my R1 to the GCG, but ended up reversing it back again because the notch cut out in the smiley grips isn't quite big enough to accomodate the ambi safety on the GCG.  Jay said he could dremel it out to fit so I may take him up on that offer. 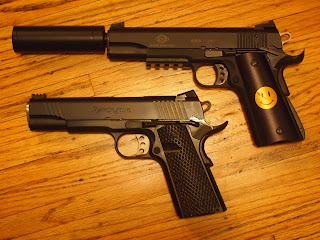 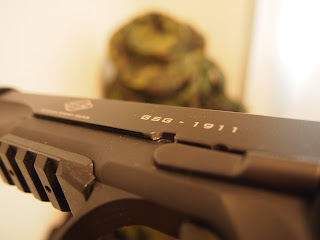 So, we put about 500 rounds through it that afternoon and there was only one thing that concerned me. There was a bit of wear on the slide-lock notch that appeared to be a bit more than paint wear.  I've heard that the GSGs have a really crappy finish on the slides because they're simply painted, but it looks like the metal here is actually getting a bit mashed.  Well, I've only got 500 rounds through it and there's a year warrantee on it so let's see how this progresses. 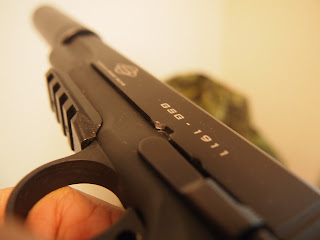 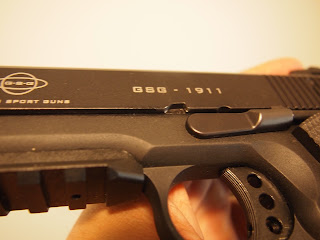 Overall, I really, really like the GSG 1911 and the experience so far.  From the first day I saw it in person to the time I picked it up, Blue Line Activities gave some incredible service, so special thanks to Mona and Claire for taking care of me.  The customer service was friendly, informative and accomodating to my needs.  I'd definitely go back and buy more stuff from them.  It's a neat little shop and they've got lots of goodies I want.
The gun it self has so far done well also.  The slide was nice and tight, fitting almost as well as my R1.  The groups were a bit messy out of the box, but after a couple of mags later, the groups started getting a bit tighter.  I'm not sure if it was just because we were getting used to the gun, or it just needed a few rounds to break in, but by the end of the session, I was pretty happy with the results.  We tried Federal, CCI and Remington sub-sonic and it only got a bit finicky with the Remington ammo.  .22LR ammo is so cheap compared to .45ACP so we started experimenting with off-hand shooting.  I usually shoot right handed, but I practiced with my left and found my groups were almost as decent with my right.  I think if we had two GSG 1911s things would have gotten stupid and we probably would have tried duellies.
Anyway, no issues surfaced after my first day with the gun that owners typically experienced in the past.  When I stripped the gun, I found that it came with the plastic guide rod (I heard the metal one was prone to breaking) as well as the clear budder disc rather than the rubber one that was prone to cracking.  The only concern I have is the wear I noticed in the slide-lock notch.  It looks like it's more than just paint, and my guess is because the slide isn't steel, but we'll see over time.
Looking forward to a lot more happy (and cheaper) days at the range!
at September 18, 2012