Ruger 10/22 in the Archangel Nomad stock (AKA G36 conversion) 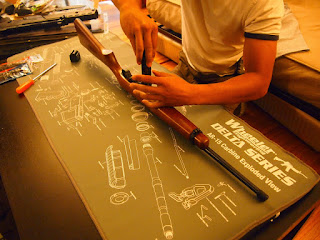 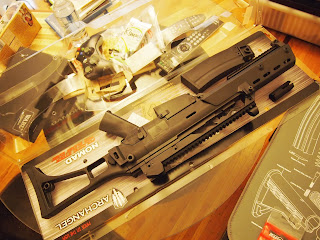 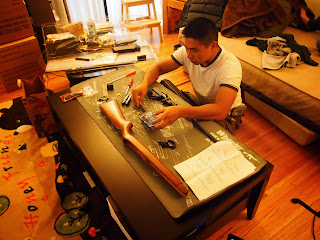 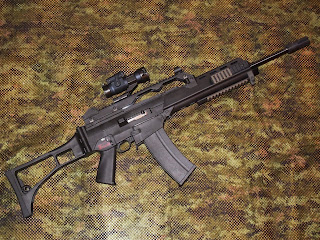 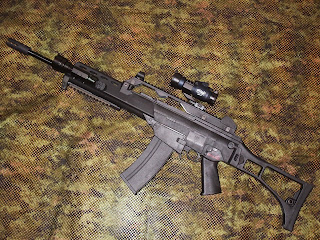 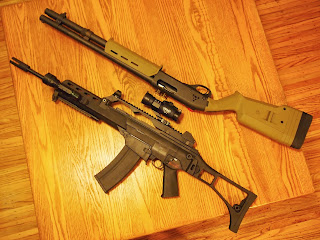 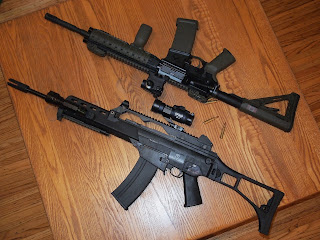 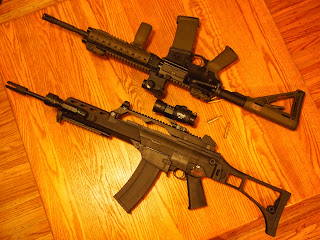 I came across a pretty smoking deal on the new Archangel Nomad stock for the Ruger 10/22 that was too hard to pass up.  I wasn't even looking for a new rifle and really didn't have much interest in the Ruger 10/22 (since I already had the capability to shoot .22lr out of my AR with the CMMG conversion kit) but this stock kit was so cheap, I just had to get it.

The next day, I started looking around for a cheap Ruger 10/22 but they were pretty much sold out everywhere.  Somehow, I stumbled on one at Wholesale Sports and that too was a really good deal.  So I ended up picking up the rifle as well, and that very same day, my buddy Jay put it all together for me.

According to him, the stock kit was a perfect, without any mods or gun smithing.  The only hiccup he ran into was with the Ruger.  The front sight post was not as easy to drift out as expected.  In fact, it was wedged in so tight, he ended up just drilling it out.  After that was done, the rest of it just fell together.

The kit is made of pretty sturdy polymer.  I've never held a real G36, but the ergonomics on this replica felt pretty good.  Took it out for the night 4wheeling and when we had the chance, I let off a few rounds.  It seemed to shoot pretty flat, but I'll have to take it out during the day and see what kind of groupings I can get.