The great thing I've learned about the Ruger 10/22 is that it can be a cheap and easy rifle to tinker with, especially for beginners like me who have zero gunsmithing skills.

I picked up a Competition Match Hammer & Sear Kit like the one found at Cabela's for a pretty decent price and found it to be incredibly easy to install.  Also, there are plenty of youtube videos out there to help you along in case you get lost with the instructions. 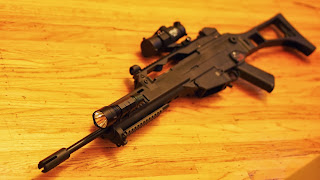 The one thing about the Archangel kit is that if you ever have to even do a field strip, you have to take the whole thing apart, and off the top of my head, I count at least 7 screws before you even get to the rifle itself.  It is a pain in the buttocks. 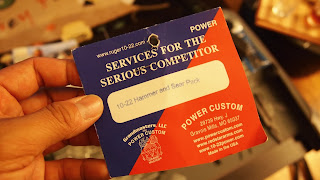 This kit cost me $64.99, same as at Cabela's which usually retails it for $69.99, but I think it's been on sale for the longest time. I'm sure there are tons of other brands out there that provide similar kits, but I went with this one because of the mostly good reviews and the fact that there was "no gunsmithing required" or "no fitting required" are music to my ears. 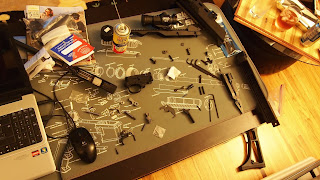 I don't have good progress pictures, and as you can tell, this is basically a shot of the trigger group taken down and strewn across my work mat along with other bits and pieces. 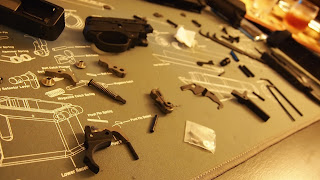 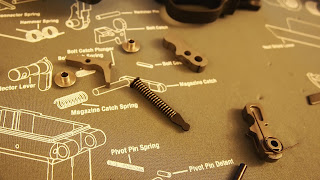 One thing that did have me concerned was extra parts when I was finished.  I'd imagine that's a vehicle mechanic's nightmare, after reassembling an engine to find an extra bolt of two lying around, wondering where it should have gone.  My kit had a few extra washers that I was assured from the manufacture were not meant for 10/22s with the polymer trigger group. 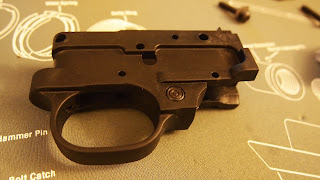 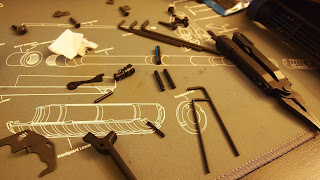 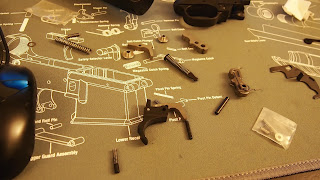 Anyway, nothing interesting to look at really, except a bunch of parts laying around, but what I should have taken was a picture of my face, with the look of dispair after reasembling the rifle.  I forgot to lube any of the moving parts.  I had to take the whole thing apart again, then put it back together.  Normally, I wouldn't complain about a field strip, but anything that requires screwdrivers and allen keys can be a bit of a pain. 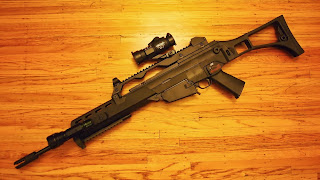 At the end of the day, it pretty much looked exactly the same from the outside.  To tell you the truth, I haven't had the 10/22 long enough to complain about it's performance, let alone find a reason to "upgrade".  I did the function test a few times, and it seemed like I put the thing together correctly.  We'll see about that the next time I take her to the range.
﻿
at July 16, 2013