Up until recently, I had no idea what the difference was between a muzzle brake, flash hider and compensator were. I’m still scratching my head over it sometimes.   I found this on the AR15.com forum, pretty basic stuff:

http://www.ar15.com/forums/t_3_4/582235_Flash_suppressor_vs_Compensator_vs_Muzzle_Brake.html
I also found a great little series of videos testing out a variety of comps, muzzle brakes, flash hiders and combos:

I don't shoot competitvely or anything, and the reason I got interested in these things is because I went out to the range with a pal of mine a few months back, and I was shooting my AR (standard 14.5 in barrel with the A2 Birdcage, happily throwing rounds down range, and occasionally hitting the target sheet. Then my pal told me to try his new build. It was a shorter barrel (10.5 in I think) and he said he was using a Battlecomp 1.0 (but he recommended I get the PWS FSC556). I was watching the dot through his Micro T1 on the target sheet and it barely moved when I let off a round. I watched holes materialize pretty much where the dot was, and each subsequent trigger squeeze didn't make holes where I didn't want them to be. I was pretty impressed and wanted my rifle to perform the same so I started searching around.


I made the mistake of rushing off to get one that sort of resembled his device, but didn't have the $$ handy to get one. I settled for and made the msitake of getting this one: 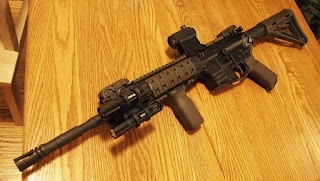 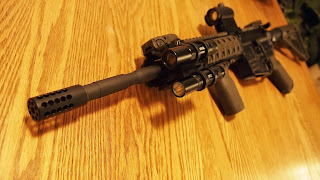 It was the same thread pattern (1/2 x 28), it was way cheaper than anything else out there. but would it work? It was designed for the 10/22 chamberd in .22lr, as opposed to my 223/5.56, but I couldn't find anything online saying this was a bad idea. However, something in the back of my mind was telling me don't try it, so I did a little more researching and all I could find was that alluminum muzzle devices have a tendancy to get loose on steel barrels when heated up, or that the alluminum threads strip easily against steel threads.

There was this one link that talks a bit about exploding muzzle devices and rust:


Maybe it was just the common sense that I didn't have, and that everyone else did, and that's why the question was never asked? I still don't know if there is any danger in using a muzzle device designed for .22lr on a rifle that's .223. I know the difference is only .003 of an inch, and I even fit a .223 round through the device with a decent amount of clearance, but I decided not to chance it and I took it off my AR, saving it for my 10/22 one day when I get a barrel for it.

What I've learned so far is that it's better to be patient, take your time and do a lot of research before buying. And as far as getting things on the cheap is concerned, yeah, somes you can make it work, but sometimes it doesn't always pay off and you may end up spending more money later. I still don't think I'll cough up $100 or more for a Battlecomp or a PWS, but I did find the AR Stoner Competition muzzle brake in a comfortable price range, and it's a similar design to the more expensive SJC Titan muzzle brake.


Anyway, I might try it out and see how it goes, but for now, I think I better take off the Tactical Solutions compensator and save it for the Ruger.