Para at the Range

So, I'm not sure if anyone was holding their breath on a range report for my new/previously enjoyed Para, but I finally managed to get it out to the range and was pretty pissed off about my first experience.  I had instant visions of all those that came before me, pointing and laughing at my expense for having not learned from their past experiences.

I'd brought a variety of Wilson Combat and Dlask mags with me and a bunch of Norc .45ACP ammo (yeah, I know, junk ammo, crap results, but wait for it, you'll be surprised).  Balmed up my mags, fed one in, racked the pistol, squeezed the trigger and like a really bad comedy, the mag fell out on my first shot.  WTF, how embarassing.  I locked the slide back, cleared the pistol, then proceeded to look around to see if anyone else had noticed.  Luckily for me, no one saw that I didn't know how to feed a mag into a pistol properly.

I inspected the magazine, slammed it back into the well, tapped it to make sure I did it right this time, rack and squeeze.  Bang!  Nice round placement almost touching the first shot from 10m (probably luck as I was using Norc ammo), but the mag fell out again!  Cleared the pistol, and again, lookeda round to see if anyone noticed.  Nope, ok, load the pistol again, squeeze, bang, and thump as the magazine hits the deck again.

Okay, this mag is messed up, try another.....and another, and another....wtf, why did I buy a single shot 1911?  I stopped looking to see if anyone noticed, because clearly this had nothing to do with my inability to properly seat a magazine in a 1911.  I debalmed my mags, and sure enough, the Dlask and Wilson combat mags would pull loose from the mag well without even depressing the mag release.

My buddy Roy, who also happens to be the gunsmith for the range I was at, took the pistol into the shop to have a look at.  The guy is a genius and he usually is able to resolve issues within a few minutes and is back with a very functional firearm.  This time, he was gone for the remainder of the night.

He found that the Para didn't like mag releases from other manufacturers.  He tried about 10 different mag releases from the range's 10 different 1911s and none of them fit.  He took a brand new one and attempted to fit it into my Para, but without some serious grinding on the mag release, it was not going in.  We tried a few different magazines and found that Dlask and Wilson Combat mags would drop from the mag well after the first shot.  They would in fact pull free from the mag well, without the mag release being depressed.

I pulled out one of the two Para mags that the pistol came with, and one of them remained firmly in the magwell and fed rounds fine without issue, the other mag just fell out.  I tried a few Remington R1 mags, and found that two of them worked perfectly, another one did not.  I also managed to make a Springfield Armory mag work without any problems.  So I had a 1911 which was finicky for magazines.....crap.  I'll try to contact Gravel Agency, who operate as the Service Center for Para Ordnance in Canada. 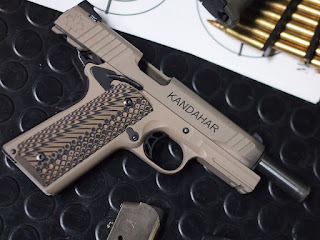 On the bright side, what rounds I did send downrange led me to believe that save for the finicky mag issue, the pistol itself was not only accurate, but precise.  I was able to produce a fist size groups with cheap factory ammo from 10m.  The rounds landed basically where I was pointing without needing to adjust the sights, so not bad considering.  I'll have to get out to the range again with some decent ammo, and take some pics of the target sheet next time. 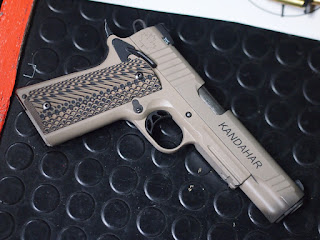 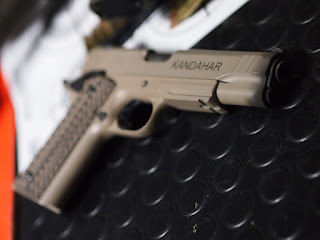 For now, I've marked which mags the Para seems to accept, so I'll remember to bring those next time to the range.  Roy did make one comment on what could be wrong with the pistol though.  He said that the problem was "Para" was written on the slide, lol! 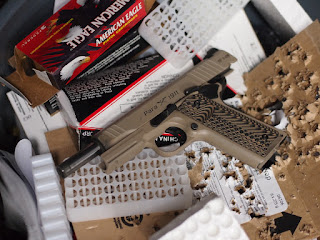 From there, he suggested a quick fix and placed my Para in the bin, hahaha! 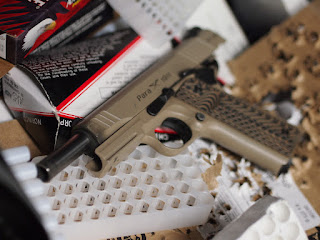 Ok, so all kidding aside, when the Para worked, it worked well.  Yeah, not cool that it doesn't accept all magazines, including ones of their own manufacture, but I have figured out which mags it likes, so at least it runs, and runs well until I can figure out if this is an issue Para/Gravel Agency can help me sort out.