Apparently identifying A2 butt stocks is no easy task.  There was a time when I couldn't find an A2 butt stock to save my life, but now I have three. 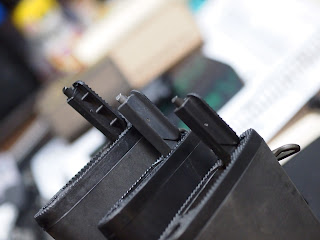 As you can see, the furthest one and the other two have slightly different designs of trap doors.  The closer two don't have the ribs like the furthest one.  The one in the middle has a lighter parkerizing on the metal.  And who really knows if these are any indication of what manufacturer these came from. 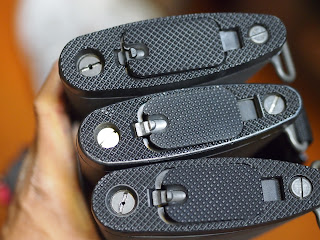 Top was an unknown brand, middle is possibly Olympic Arms, and the the bottom one was supposedly a Colt.

Now, I only took pics of the butt plate (maybe I'll redo this post with pics of the rest of the stock) but the butt plates were the only discernible differences between the three stocks I have.  The checkering appears to be slightly different between all three, I have noticed a drain hole in the mounting screws of the top and bottom stock, but not in the middle one.

I've also noted that the trap door release tab on the top one has some sort of pattern or mark on it, where as the bottom two have plain tabs.

I pulled this post from a forum discussing IDing A2 stocks....seems like everyone is at a loss:

Doc, after asking several people and posting the question on other forums, I'm under the impression that you're absolutely right. I'm guessing that there is one or two manufacturers that are supplying A2 stock assemblies to all of the rifle companies and aftermarket vendors.

After hearing that Colt makes the best A2 stock, I was able to find a few dealers advertising them for about $130. The problem is that they, and just about every other dealer selling non-Colt A2 stocks, were using the exact same file photo of the stock on their website. All of the other sites were selling what was probably the exact same item made by the same manufacturer as the 'Colt', but for about half of the price. Most of the sites were selling A2 stocks but were not even indicating who manufactured it.

As far as I can tell the Colt stocks do not even have a stamp or mark to differentiate between them and any stock sold by any other vendor. Someone indicated that early Colt models (1960's M16s ?) had a "C" stamped on the right sight of the stock, but current models have no marking. Maybe Colt initially made their own stocks but eventually outsourced them to ACME company?

If this is accurate then shame on the vendors for advertising an Acme brand stock as a Colt for twice the price as the same thing you can get from the vendor next door. If this is not the case and there actually is a Colt brand stock, then someone please correct me.


Some have suggested that Colt stocks appear grey and others black, but I'm not sure if that's a given as plastic has a tendency to fade over time without proper care.

Email ThisBlogThis!Share to TwitterShare to FacebookShare to Pinterest
Labels: A2 butt stock