Top view of white-Knight's unknown brand on the left, and his real PEQ15 on the right. 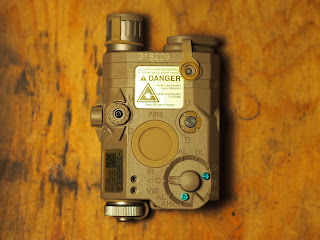 He has noted that the serial number (1) was missing on his fake one, and the fake ones that bother to print this will often print it too big. This is clearly the case with the Element version, but at least it's printed.

He also noted the housing on the dials (2 and 3) were different.  The fake ones were often molded into the body of the unit, but on the real deal, they are clearly a two piece unit, with a separate seal.  It appears that the Element version has addressed this.

The training screw (4) is sometimes missing on some knockoffs, or they appear in silver or blue.  His appears to be missing the screw, but the Element came with these.  On the real deal, they are there to keep the dial from going into high power, however the civvie version doesn't have a high power setting and the lower power is apparently just duplicated.

The lens covers (5) on the real one have shiny silicon/vinyl straps which hold the caps tightly, but the fakes are just rubber and are often loose like the Element, or sometimes missing altogether like his in the above pic.  I note the Element version has tried to duplicate the semi-clear tab that holds the strap in place, which is different than the sold black tab on white_knight's fake. 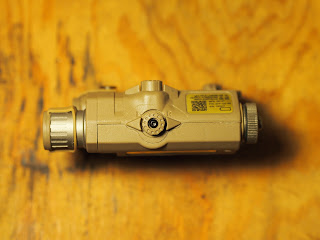 white_knight indicated the MFG tag should be on the bottom and the power setting sticker at the top.  The real ATPIAL also uses a red rubber o-ring where the knockoff is black.

Bottoms of the fake (left) and real (right) 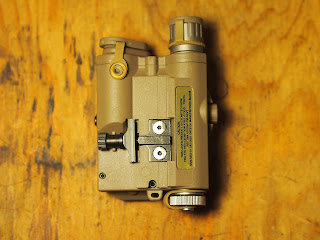 Bottom of the Element

The mounting block (6) on some fakes have been seen to be made in plastic, with only the bar and knob being metal, but the Element has duplicated the entire metal block.  The problem with the Element unit is the screws weren't countersunk enough and stuck out a bit.  I had to file them down for them to sit flush in the mounting block, otherwise the whole unit was a bit skewed when mounting on the rail....not that it mattered because I only use the thing for photos.

The screws (7) on the real deal are all sealed with some sort of hard epoxy sealant with no exposed screws apart from the mounting bracket.  On the fakes, the screws are either exposed, or not there at all.  He added as a side note that the civvie version is missing the exemption sticker since it doesn't need it, but they will appear on the fakes. 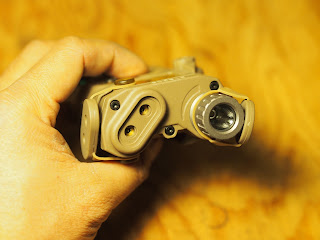 More sealed screws (8) on the real deal, with the exposed ones on the fake.

The real one also has coated lenses (9) for both the IR illuminator and lasers but the fake does not. 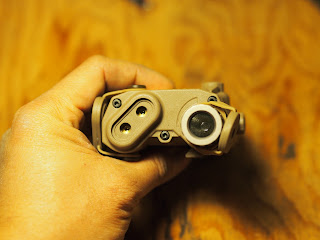 (10) More unsealed screws on his fake and the Element.  The lasers on his fake (11) weren't covered and had no outer lenses but it appears that the Element version has addressed this, though the lenses are not coated.  Also, his fake has a flashlight (12) like mine, unlike the real deal which is supposed to be an IR illuminator.  Some fakes out there actually have an IR illuminator, but the Element is not one of those.  Apparently some knockoffs also use an aluminum bezel for the flash light where the real deal is polymer.

Back of the real ATPIAL

Back of his unknown brand fake 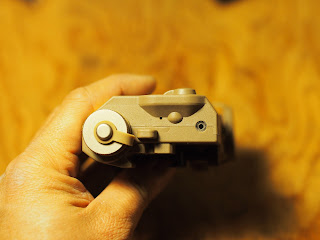 Back of the Element

There's apparently an LED indicator on the back (13) that turns green when the unit is active.  Some knockoffs will have the notch for it, but no LED, and others might not have anything at all.  The Element appears to have a hole, but nothing else.

The remote connector (14) on the real deal will have a large port for a proprietary cable, but on the knockoffs (16) they will often use a small pin connector.

Lastly, white-knight noted the hard edges on the knockoffs.  He noted that on the real ones, the edges are more rounded, less defined. 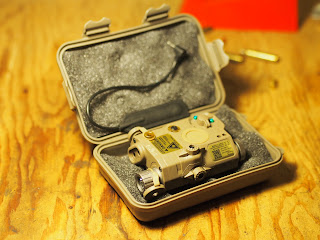 It came in a fancy looking, but flimsy box, along with the tape switch I didn't bother mounting as it's only on the rifle for photo shoots. 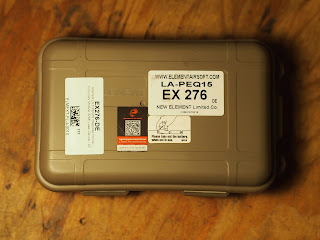