I don't remember if I bought this kit for any particular reason other than it was probably on sale and I couldn't resist a good deal.  I did a brief table top review of the kit then tucked the kit away into my spare parts bin for later use.  There are however way better, more in depth reviews of the kit here:

The kit first ended up in my Mk12 Mod 1 Build.  I honestly didn't shoot my Mk12 Mod 1 build beyond test-firing it and shooting a few groups, probably less than 50 rounds of Hornady Steel Match.  There was one time I found a strange piece of metal in the shape of a "D" in the lower receiver, but it was such a strange thing to see and didn't seem to belong anywhere, I set it aside and eventually forgot about it (more on this later).

Eventually, the lower parts kit migrated over to my BCL102 where the kit saw a bit more use (because the 102 was non-restricted, and also because this rifle had so many bugs to work out).

I probably logged about 100 rounds through the 102, but twice at home under dry-fire conditions, I noticed the hammer pin walk out.  I guess I was lucky it didn't happen in the field.  When it happened the first time, I thought maybe it was a one-off.  The second time it happened, I wanted to blame BCL for lack of QC and maybe having enlarged hammer pin holes milled in their lower receivers.  To prevent the pins from walking out again in the BCL, I swapped over some anti-walk pins from another rifle, but while I had the rifle apart, I also decided to yank the Armalite trigger in favor of the Stag unit my buddy had laying around and wasn't using. (see previous post).

The Stag one felt smoother while the Armalite unit still felt a bit on the gritty side.  The Armalite unit also wasn't broken in yet, so the trigger weight was still pretty heavy (apparently it's supposed to settle down to a 5 lb 2nd stage trigger pull).  I measured the new Stag 10 trigger in my BCL and it broke at a nice 4.5lbs: 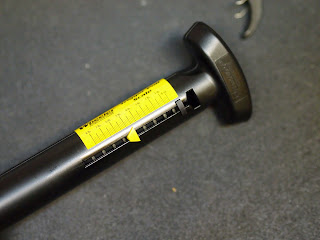 So now, I had this Armalite Tactical Two-Stage Trigger set laying around and decided that maybe I could use the thing in another rifle.  Which rifle do I have that I sort of shoot sometimes, but has a horrible trigger?  Instantly, I thought of my Bushmaster ACR.

Since I first got my ACR, I had never been completely satisfied with my ACR since I could never find a scope setup that I was really happy with, and part of the reason for that was because of the stupid charging handle, which function was often disrupted by various scope mounts.  For a while, I thought I either had to mount my scope way back, or get a cantilever mount, or get an aftermarket charging handle that sat a bit lower. 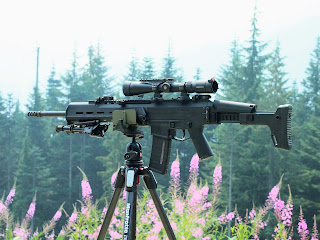 As you can see in this photo, the charging handle is angled slightly upwards so it really limited optic mounting choices.

Well, for years, my ACR just sat in my safe, seeing very little use because I just couldn't find the perfect mounting solution.  One night I was bored and snooping around online and discovered I could not only flip the charging handle to the other side (which didn't resolve the scope mount issue), but I could also run the thing inverted so that the handle sits lower.  As soon as I discovered this, my ACR became my new favorite rifle.  I threw my Eotech 512.A65 back on the rifle, along with my 3x magnifier and BUIS....all which I thought I had to ditch because the charging handle always hit the long 512 optic.  I almost sold the Eotech thinking that there was no rifle I wanted to use it on (most of my ARs are clone builds which don't call for this particular model and no, I don't have a Diemaco C8A2 clone). 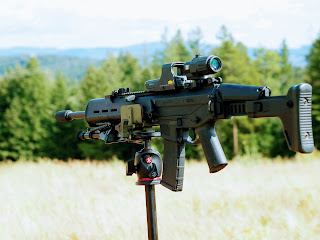 Compared to the previous pic, you can see the charging handle inverted so it's now angled slightly downward, and completely clearing the Eotech.

Anyway, going off on a tangent here, but long story short, I had a new found interest in my ACR so I figured the thing deserves a better trigger.  Yes, I found the Armalite trigger gritty compared to the factory Stag Arms trigger, and yes, I hadn't even shot the Armalite trigger enough to "break it in" and let the weight settle down to 5 lbs, but it was probably still light years better than the craptastic factory Bushmaster "mil-spec" unit. 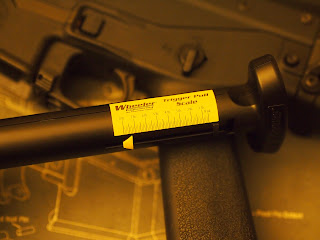 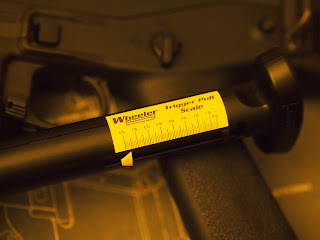 Before I yanked the factory Bushmaster unit, I tested the trigger pull and found it to be about 7.5lbs-ish.

I went on YouTube to learn how to take out the ACR trigger pack and it really wasn't that hard once you got into it. 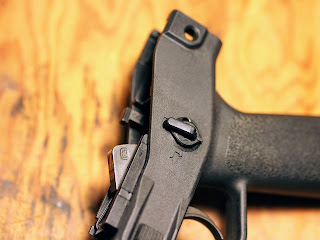 First remove the lower receiver.  Inside the trigger pack there's a tab you have to pull upwards slightly, then flip the selector to the 6 o'clock position. 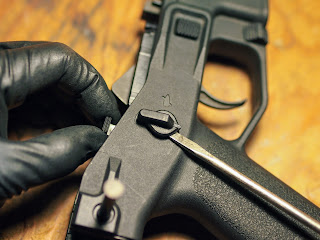 Flip the lower over and while pulling the same tab upwards, pop the right side of the ambi switch off.  You may need help from a flat-head screwdriver. 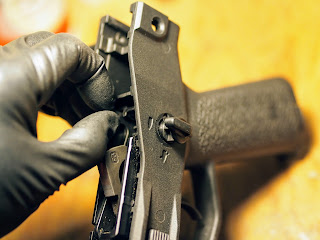 Flip it back to the other side and while maintaining upwards pull on the tab, wiggle the selector out. 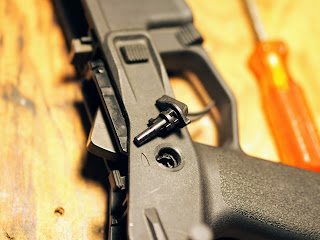 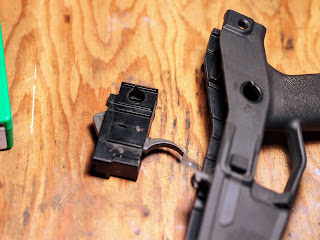 Once the selector assembly is out, the whole trigger pack comes right out. 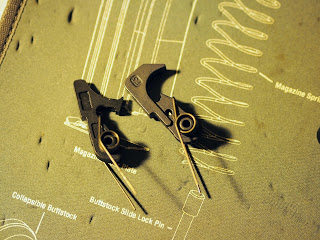 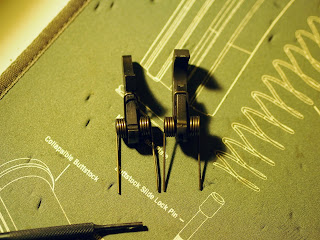 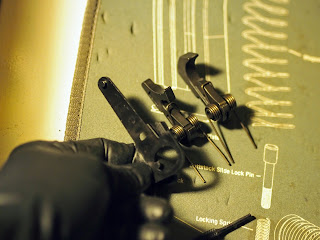 The reason for the slight bend in the leg is because it sits inside this lever. 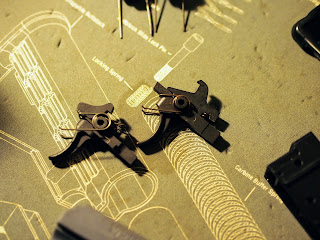 The Armalite trigger on the left and the factory Bushmaster trigger on the right.  I've had the trigger set at the lightest setting (top tab) but since I've hardly used it, it supposedly isn't broken in yet. 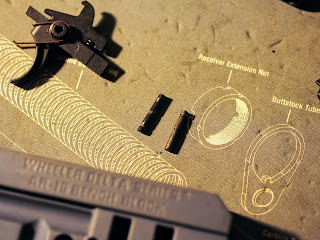 The roll pins which appear to be identical to standard AR15 trigger/hammer pins.  Anyway, I reinstalled everything and tested the Armalite trigger in the ACR: 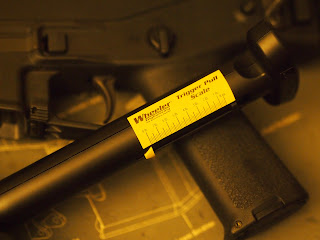 It sometimes pulled at 7.5lbs but it wasn't always consistent (or maybe the way I was testing the weight with the scale wasn't correct).  Either way it was heavy AF and not any better than the factory Bushmaster unit, in fact, it was heavier.  The only difference was that it was now a two stage unit, and though the Armalite unit was still gritty, it was less gritty than the factory Bushmaster trigger.
The next day, I started reading other reviews on the Armalite trigger and read about how the Armalite trigger kit is designed and how the system retains the hammer pin.....suddenly my mind flashed back to this mysterious D-shaped ring I found in the lower receiver of my Mk12 one time.  I had no idea what it was or where it came from at the time and almost threw it out because it looked like the end of a spring, or some bent wire, but the trigger assembly in my Mk12 looked fine and nothing looked broken.  But because it had no business being inside my lower, I set it aside just in case and sort of forgot about it.

Fast forward a few years and I finally realize what the thing was.  As you can see the little D-shaped metal ring was there when I unboxed the kit: 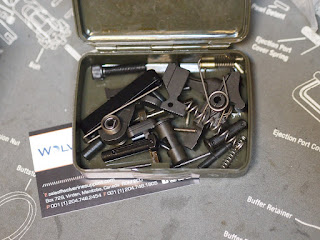 I thought it may not be an issue with the ACR because the trigger pack sits inside the ACR lower receiver and the hammer pin should be captured by the walls of the receiver, preventing the pin from walking out. 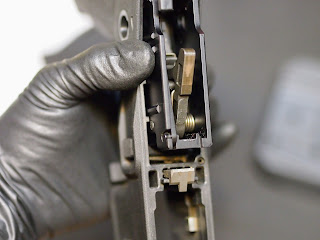 This however proved to be incorrect and as you can see, there is enough of a gap for the the hammer pin to slide out of position.  I tried to remember what I did with the thing and took a look at the state of my work bench: 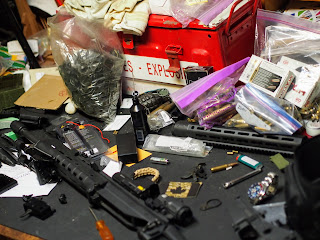 It doesn't always look like this, however when it is in disarray, it's a complete shit-show.  I've cleaned it and it's gotten messy more times than I can count since I first found the thing in the bottom of my Mk12 lower, but I decided it couldn't hurt to look. 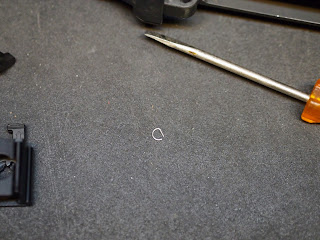 By some miracle however, after sitting on my desk for a few years, I was able to find the ring.  I was surprised I hadn't tucked it away in a zip-lock bag and file it away in my spare parts bin.  I guess I was deciding whether it was significant enough to keep it or toss it.  I think it may have even ended up in the garbage one time, but I must have fished it out just in case I would need it. 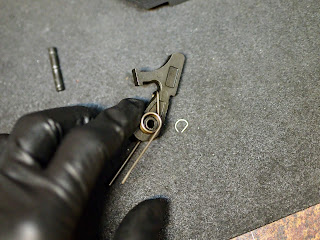 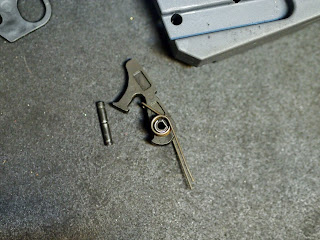 Back onto the hammer it went. 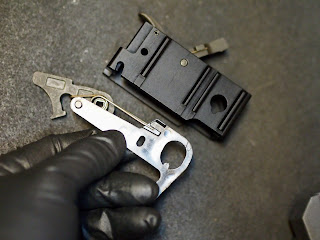 So, now I had to make sure the D-ring stayed on the hammer while I mucked around with the hammer spring leg, the lever, all while trying to get the hammer pin in and past the D-ring. 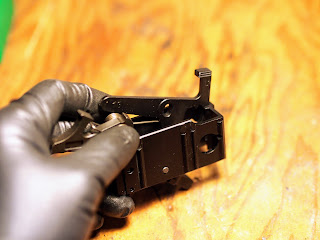 The hammer spring leg and where it's supposed to sit as you drop the hammer and lever back into the pack. 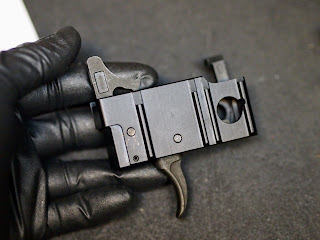 After a bit of work, I managed to get it all back together.  The hammer pin snaps into place and the D-ring locks it all in.  It's actually a pretty smart design, however when I first installed it, I didn't even notice it, nor did I read the installation instructions since I'd already done a few LPKs by that point.  I think Armalite should write in big bold words, highlighted in yellow that the installer should pay attention to this.  They should also include a few spare D-rings in case dumb-asses like me lose it. 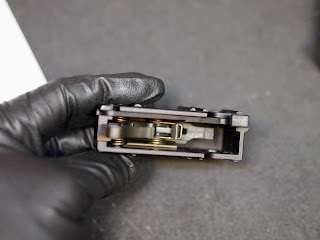 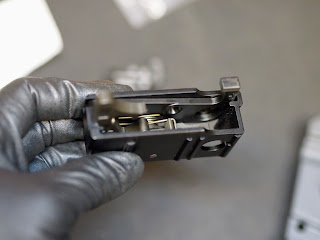 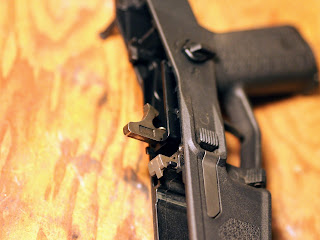 Anyway, after getting the trigger pack back together, it was just a matter of throwing the thing back into the lower.

Now my BCL should not have any reliability issues in terms of the charging handle, or the hammer pins, and my ACR now has more optics mounting options, as well as a slightly better trigger (less gritty, and potential to have a lighter pull after break-in.  This trigger better not stay 8 lbs or I'm going to be pissed.  I've been reading about a Tech Note (#14) from Armalite's website about tuning this trigger but most links seem to be dead, but I did find it here.