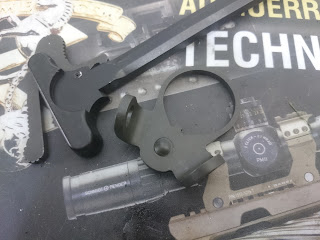 The CF has decided to update the C7A2 with a few bits here and there.  The update includes a new sling, not pictured here, a new sling plate, and a new tac latch. 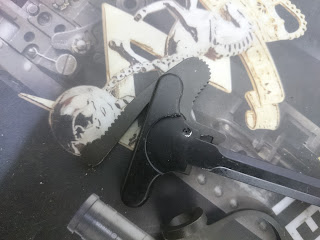 As you can see, there has been a redesign of the claw.  It appears to be a bit smaller to reduce the chances of getting snagged or hooked on your tac vest.  Lets see how it plays out in the long run.

The new sling plate features two mounting points in the form of two loops folded back towards the user.  These ears are already pissing a few folks off as some have complained that they dig into the hand or glove.

There will always be complaining when it comes to new gear, maybe this complaint will go away over time, maybe it won't.  Personally, I believe there are better options out there, like the one that comes factory with the Colt Canada SA20, but the folded ears seems to be at least better than the thin slot that was previously standard issue on the C7.

Email ThisBlogThis!Share to TwitterShare to FacebookShare to Pinterest
Labels: C7A2