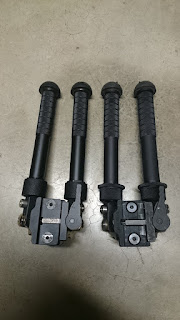 Clone on the left, real on the right. 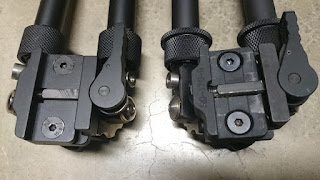 Close up of the clone ADM QD mount on the left, real on the right. 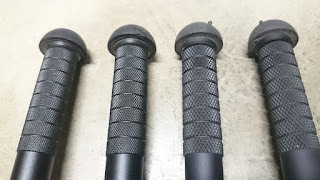 The newest clones have even gotten the legs down pretty good, clone on the left, real on the right.  The checkering on the clone is finer, but the knurling on previous generations of clones were reversed.  The feet are pretty good in that they are interchangeable with real ones. 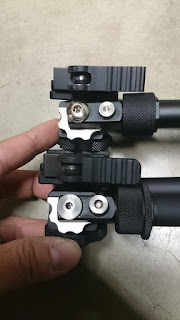 The hardware on the clone is some sort of plated finish where the real deal is a machined finish. 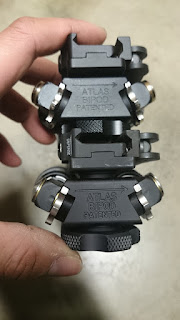 The leg swivel lock washer is thicker on the real deal compared to the thinner one.  As you can see, this one has the Atlas trademarks on them, many of the newer ones found on Amazon for $60Cad or Deal Extreme for $50 no longer have the trademarks. 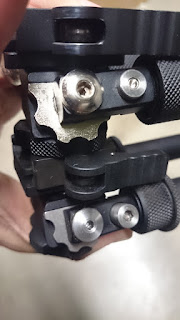 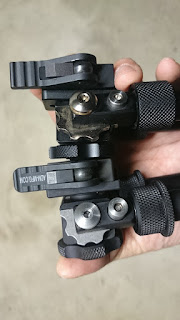 The QD mount on the fake does not carry ADM trademarks, though I've heard some do. 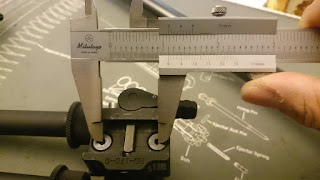 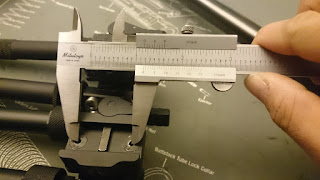 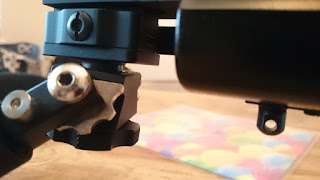 Between the bipod and the mount is supposed to be a ball joint.  You can spin the tension knob completely off the clone, but I've never done it with the real deal.  The reason I tried on the clone is because it would not tilt properly.  Meaning, if I backed it off, the bipod would tilt, but you could not tighten the knob to increase tension for the bipod to hold the tilted angel.

If I cranked it down while tilted, what would happen is the bipod would revered to a straight up and down position and you would lose the tilt.  You could just leave it loose and it would tilt, but it would wobble over.  If you don't need the title feature, great. 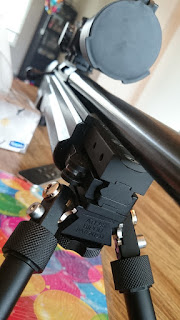 I used to swear by Chinese knock-offs, and thought everyone who paid full price for the brand name ones were chumps for throwing their money away.  I had a collection of Chinese Fakepoints, but they eventually died when I ran them on my Chinese AR.  Recoil rattled the internals apart.  Same for a Chinese clone scope....the M14 just destroyed it.  Had a set of fake Magpul buis, ran fine without issue for a few months, then the plastic started to crack.

I'm still not entirely against Chinese clones, but certain items I would prefer to use the real deal.  I tried the Atlas clone on my TRG42 and I needed a titling bipod because I primarily shoot on uneven terrain (crown land).  I had a pivoting $60 Champion bipod I had on there that really didn't need to be replaced because it was able to hold the weight of the rifle on any angle tilt.  My $50 Atlas clone didn't do that.  I didn't junk my clone, it's just sitting on my 10/22.

I think the reason my buddy's broke was because the pivot screws were made of pot metal (just a guess judging by the finish).  He's running a 10TR in an XLR chassis, which isn't really heavy, but after loading into his bipod over and over again, it just gave.  He swore by the clone Atlas for a few months, even had an order in for three more, until his first one broke, then he cancelled the rest.

A vendor on CGN peddling conterfeits: 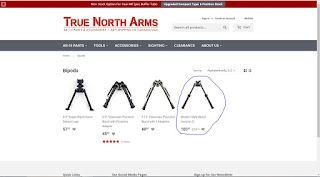 Email ThisBlogThis!Share to TwitterShare to FacebookShare to Pinterest
Labels: Atlas