I picked this shotgun up in a trade, basically, I had two Remington 870s with Dominion Arms 12.5" barrels, and I really only need one, so I traded my buddy for his complete Dominion Arms 8.5".  Some folks may be questioning my intelligence in trading a real Remington 870 for a clone, but the 870 Express is Remington's entry level shotgun, and prone to qc issues, sub standard finishing and easy rusting.  I didn't experience any issues with mine, but then again, I really didn't pay very much for mine, I had two of them, and it was not like I could simply swap on an 8.5" barrel.

Second question I get a lot is, why the hell do I need an 8.5" shotgun?  Haha, I don't really.  I got it for $hits and giggles.  My 12.5" is already a hoot to shoot, and always a great topic of conversation when you let off a 3in magnum slug indoors and you startle the birthday boy a few lanes down who's shooting the range S&W500.

Anyway, the DA Grizz came with the Magpul SGA stock, which is a fine stock, and I run one on one of my other 870s, so to differential this toy from others, I decided
to try out the Mesa Tactical stock adapter and MFT Minimalist stock. 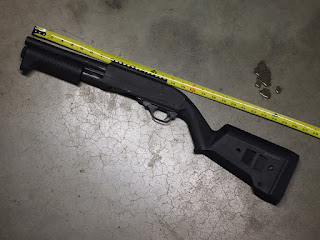 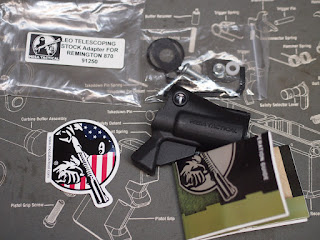 All the parts that came with the Mesa Tactical adapter kit.  You will still need to provide your AR lower receiver extension tube, the castle nut, an AR style grip and butt stock.  The hardware you will need (nuts and bolts) to attache everything is included in this kit. 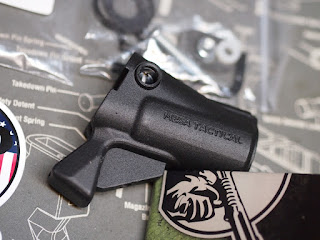 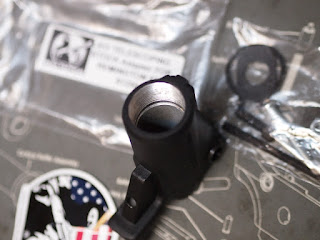 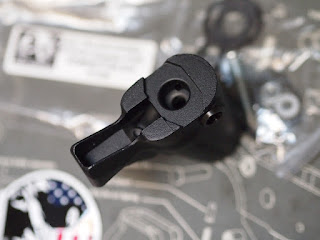 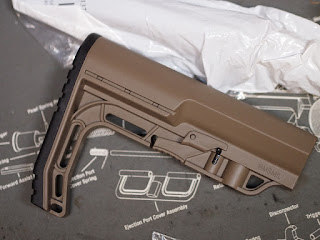 I've got about half a dozen different AR butt stocks in my spare parts bin, but I'd never tried the Mission First Tactical (MFT) Battlelink Minimalist Stock.  I'd read a lot of good reviews, so I figured I'd give it a shot.  The first thing I noticed was how light it was, which had be concerned that this was an airsoft knock-off since it came with no packaging.  But I took a look at the material, and it it did not appear to be thin gauged plastic, and it was quite sturdy with absolutely no flex whatsoever. 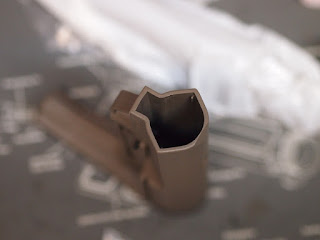 It was however, quite a pain in the dick to install.  It was an extremely tight fit, with absolutely no wobble whatsoever.  I did a little research, and apparently this is normal for this particular model. 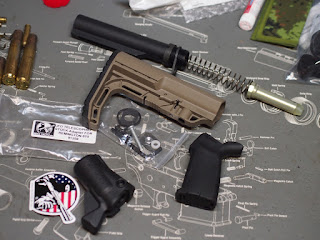 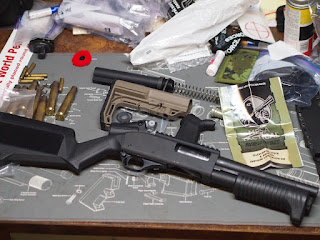 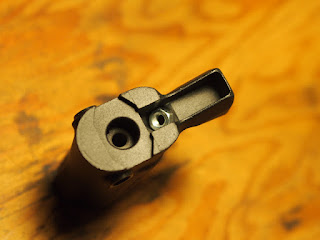 As mentioned earlier, the kit came with all the little bits of hardware needed to mount your furniture.  Installation was a breeze and very straight forward. 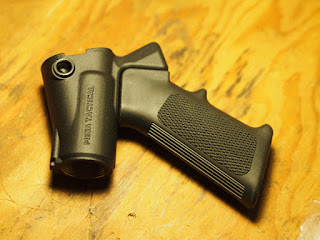 I was going to use a Magpul grip I had laying around in my spare parts bin, but that would require the removal of material, so I just threw on one of my A2 grips.  I'll probably shop around for something in tan to match the stock. 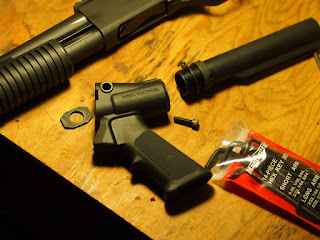 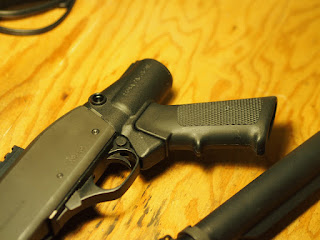 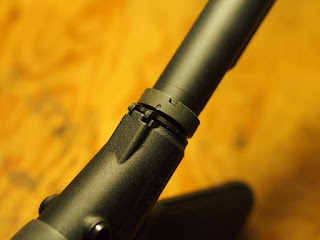 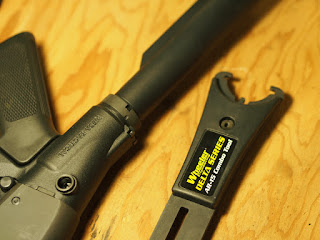 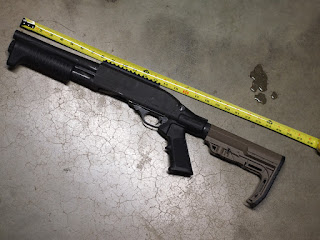 I was sort of crapping myself when I took out my tape measure, but I'd done some research and found that this had been done before and met the minimum requirements.  Mine came in at just a hair more than 26". 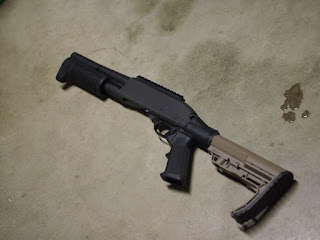 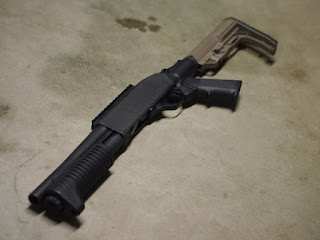 I was never really into pistol grip shotguns, and even less of a fan of AR adapter kits for 870s.  I used to think why go to the trouble to make a shotgun look like an AR?  But I guess I've been running traditional style stocks on all my shotguns, I just wanted to change things up a bit and ended up with this space gun, haha!  Will probably take this out tomorrow for a test drive.