So, I’ve been itching to buy another 1911, something with a parkerized finish, that didn’t necessarily have a low round count, but most importantly – inexpensive.  I’d seen a few I had my eyes on EE but missed the boat on both occasions because I hummed and hawed just a little too long.  One was a Springfield Armoury Loaded with 800 rounds down the pipe, no idiot scratch, for $750.  Sold within minutes.  The second was a STI Trojan, about 500 rounds through it, no idiot scratch for $850…gone within minutes.

I’ve always liked my Remington 1911 R1 Enhanced, it’s a nice shooter, very accurate in the hands of someone with more shooting skill and ability than me, buttery smooth and finished beautifully.  Unfortunately, because it’s so awesome, it’s developed safe queen status and I just pound rounds down range with my Norinco 1911 instead.  So, I’ve been looking for a beater that’s not as rough around the edges as my Norc, but not as pricy as my R1E.  I even considered getting a used one, but even those go for about the price of what I paid for mine brand new 4 years ago.  Going price for a Remington R1 Enhanced (with threaded barrel, I couldn’t find a price for the regular barreled one) is $1,029.99 and then they had this one called the R1 Carry which goes for about $1,229.99.

I happened to stumble on one of these R1 Carry 1911s on EE going for something in the price range I was looking for, no idiot scratch, photos appeared to indicate that it was in excellent shape without any visible wear so I started doing a bit of research on this pistol and for the price, I decided to jump on it.  Not a bad deal at all, round count was far lower than expected and when it showed up, it actually appeared to be in better shape than my “safe queen”, lol! 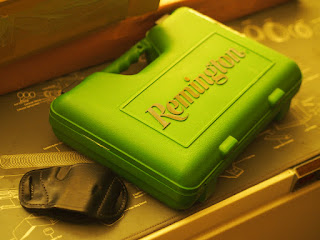 Anyway, the deal came with the pistol, a 7 round mag and an 8 round mag, the original hard case, VZ grips, trigger lock and Bulldog Cases molded leather belt side holster.  The mags had some wear, but everything else was minty new. 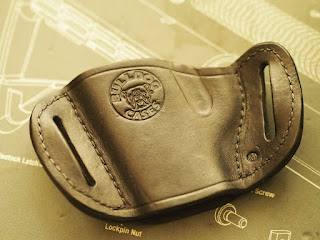 The only other holser I've had experience with is a crappy Condor tactical one and a Blackhawk kydex one I flipped a long time ago.  The leather is smooth, the holster is extremely compact and fits the Carry like a glove. 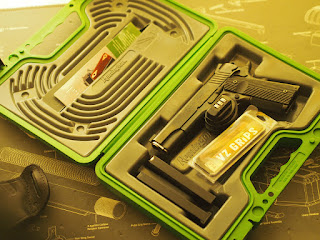 This reminded me of when I first opened the box of my Enhanced, for which I never took any pictures of the unboxing.  I've come to realize that the unboxing is one of the most thrilling parts of acquiring a new toy and I wish I'd taken more photos of the unboxing of my first few guns. 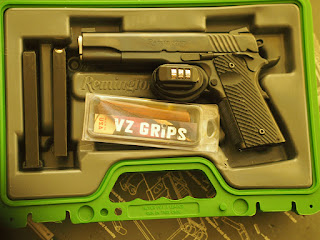 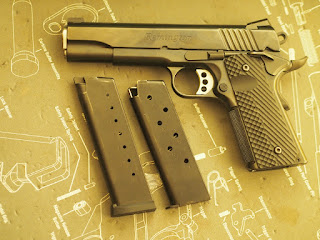 The finish had the same deep bluing as my R1 Enhanced, but just about every single edge of the Carry has been dehorned (rounded out) to ease drawing and holstering.  There were also no grip serrations at the front of the slide, which took a bit of getting used to because every one of my pistols has these grip serrations at the front of the slide.  Some people hate these, others love them.  I don’t hate or love them, I’m just used to having them. 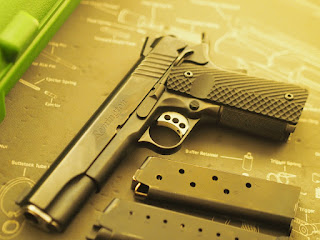 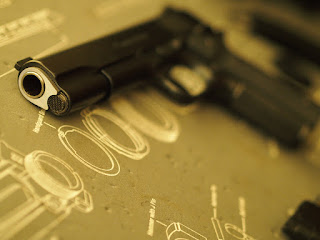 The slide to frame fit was actually better than my Enhanced, with even less wobble, and the barrel bushing/barrel/slide fit was seamless, literally a perfect fit.  Just like my R1 Enhanced, working the slide back and forth felt like it was lubed with butter and the trigger broke about the same as the Enhanced, light years ahead of my chunky Norc (I know, not a fair comparison). 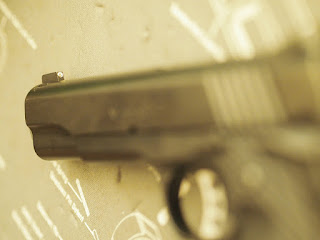 So, the Carry comes with a tritium front sight and Novak rear.  The front sight is very visible during the day and very bright at night. 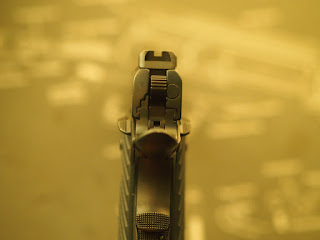 The rear sight is slightly different than the Enhanced (sorry, didn’t take a comparison pic).  The Carry’s rear sight is dug out, presumably to prevent refection or provide some sort of contrast when looking for the front sight post? 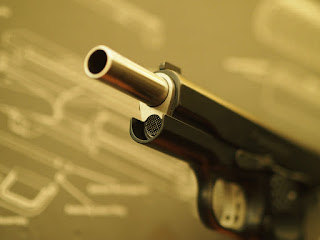 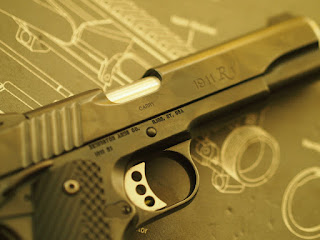 The markings are nice and subdued, not like some other manufacturers who prefer the cluttered billoard style markings. 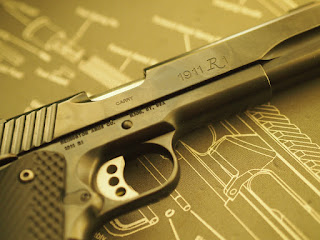 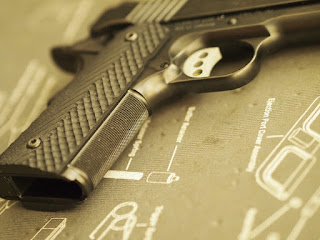 The front strap is checkered to 25 lines per inch and maybe I just need to man up, but it feels extremely aggressive compared to my Enhanced.  Feels like grabbing onto a cheese grater, but I could get used to it and there should be no concern about the grip slipping out of any sweaty hands. 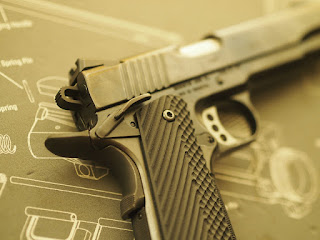 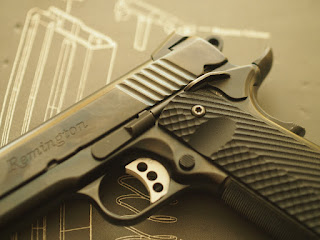 The previous owner included VZ Operator II grips.  I’ve got a pile of assorted 1911 grips at home, but these are my first VZ gips and I have to say I’m pretty happy with these.  Aggressive checkering in the front, thumb cut for the mag release, and barely worn.  The original Remington Cocobolo grips were included as well, and from what I’ve read, these were well thought out as well.  I’ll have to throw those on one of these days to see which I like more. 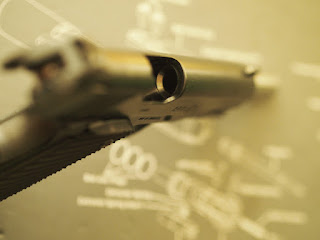 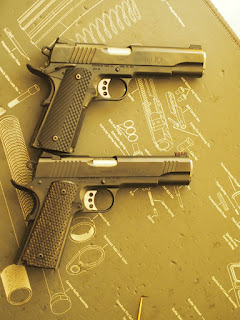 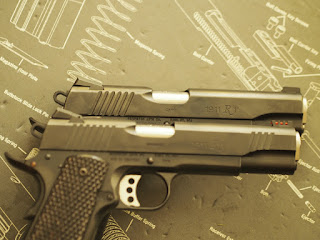 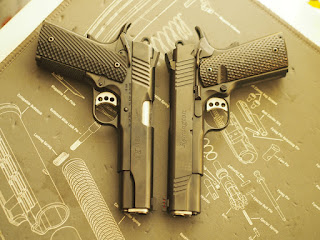 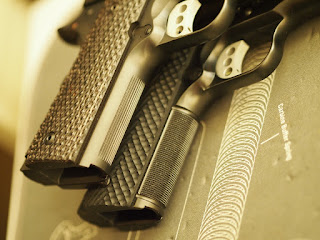 Comparing the two front straps, the Carry (right) will take a bit of getting used to, but I think I’m going to like it.  It might just be my imagination, but it feels like I can get a better grip on the Carry over the Enhanced. 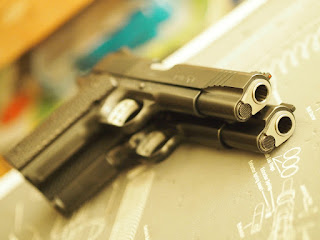 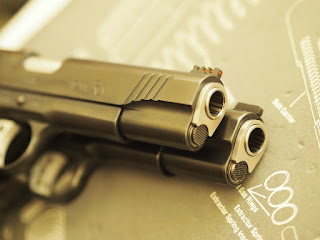 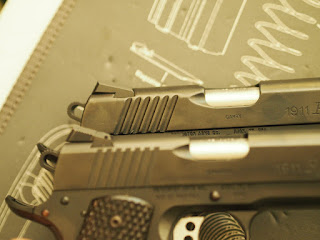 Overall, I think I’m going to be pretty happy with the Carry.  I bought it as an alternative to shooting my beater gun and my safe queen, but now I’m torn because the Carry cost me less than my Enhanced (though I think it retails for more), probably has less rounds and is in overall better shape than my “safe queen”, lol!  Meh, I’ll probably shoot the hell out of it, hahahaha!