Well, I finally scratched that itch I've had to get a Glock,  It's been maybe 5 years since I tried a Glock for the first time, my pal Jay's 17 in OD green.  It was one of the reasons I got into firearms in the first place and my original plan was to buy one as soon as I got my PAL.  Over the years, that plan fell by the wayside and I kept on putting it off and putting it off until now. 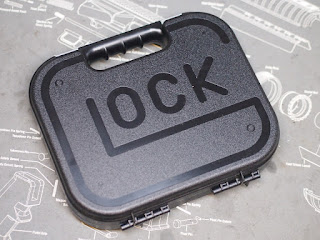 There have been a few other companies offering the IOP (Individual Officer Program), but right now the program is being offered through Rampart Corporation and they put out a deal that I couldn't resist.  I spoke to my pal that works at the local gun shop and it turns out that the IOP is below dealer cost.

To be honest, I don’t know a thing about Glocks.  I didn’t do any research before buying this one and besides my buddy’s G17, I’ve never really played around with them.  All I knew about it was from its reputation, that it was ugly but one of the most reliable handguns you could ask for.  So bear with this unboxing because I've probably shot a glock less than 5 times in my life and you really are reading this from a Glock noob's point of view. 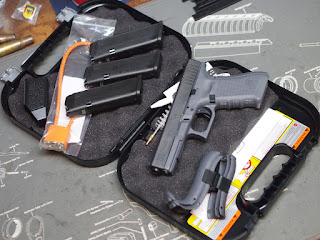 The 17 came with three 10 round Glock mags, the cable lock that nobody has any use for, a cleaning brush, a magazine loader, the manual and a few stickers and a pen from Rampart to notate the Glock IOP program. 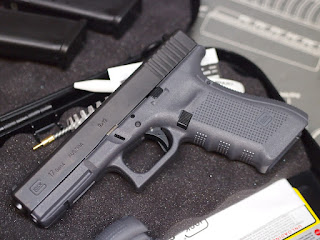 I think this stealth grey is a new color for 2016/2017?  It does look pretty good and doesn't really stand out as flashy or anything. 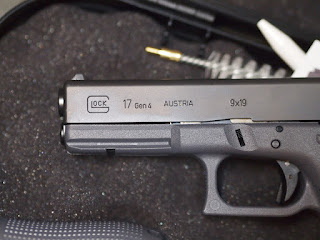 The accessory rail is a simple design with a single notch in it for your pic-rail weapon light mount.  The one thing I've read about that does sort of stick out in my mind is the gap between the frame and the slide.  A lot of new Glock owners will be alarmed by this as the frame of some examples will appear upward sweeping towards the muzzle end and will often be mistaken for a warped frame.  I've seen on the local forums that this topic periodically pops up from time to time.  In this example, and the example I saw at Reliable Gun, the frame appeared straight, however I was told that there is still no guarantee that they are all straight.  That being said, my pals that own Glocks tell me that the appearance of the warped frame has no bearing on the gun's performance, and the frame does not interfere with the slide at all. and more importantly does not affect accuracy or function in any way. 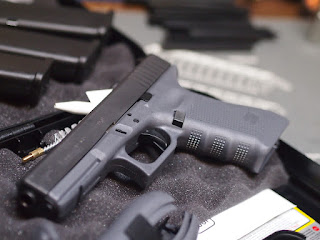 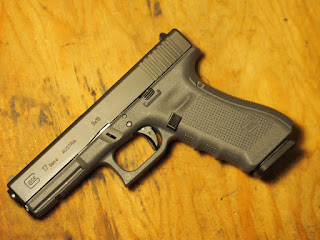 When I grip the pistol, the first thing I notice is how well it forms to my hand.  I'm able to establish a fairly firm grip, my fingers don't slip down and I'm able to ride my hand pretty high on the tail.  I think this is because of a combination of the finger groves in the grip, the factory stippling and the overall shape of the grip.  As pretty as some of my other handguns are, I don't feel the same positive grip as I can with the Glock.  Once I latch on to it, the gun feels like an extension of my hand.

There's also a slight notch where the trigger guard meets the grip and it's probably designed to capture your middle finger, allowing you to ride higher with the grip.  I've seen many people file or dremel their own notches into pistols that don't come with it.  Nice touch. 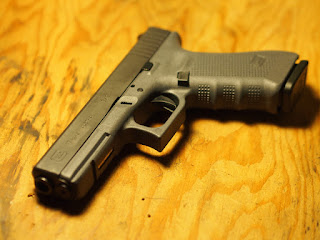 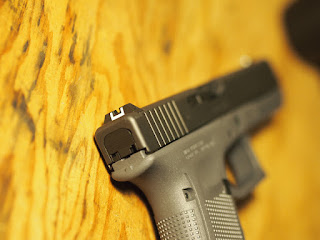 I opted for the most basic model with fixed sights.  You can order Glocks with adjustable sights for an extra $50 or so, and nightsights for an extra $100 or so.  In a defensive situation, I suppose night sights would be handy, but I've got three other pistols that already have night sights, and I've never shot in the dark at the range.  In the worst case scenario where the world goes to hell and civilization is over-run with zombies, well, I have a few other guns to choose from. 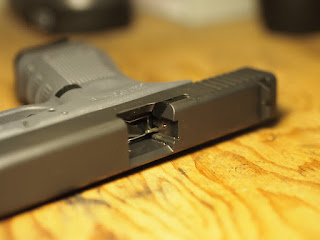 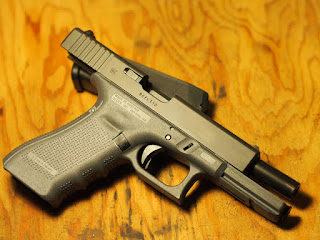 A lot of my pistols have the front slide serrations and I like them because I'm use to them.  It gives me something to grab on to when I want to to a brass check, but that being said, I'm not going to wither up and die if my gun doesn't have them.  Some people are thankful that some guns don't have them because apparently they tend to tear up holsters.   The nose of the pistol appears to be beveled just enough not to catch on any material when holstering, so I think this was definitely considered during the design. 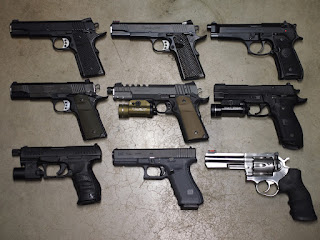 Size and weight wise, I'd say it closely compares to my Walther PPQ (there are probably better comparisons, but this is the closest I own).  The threaded barrel on my PPQ makes it just a touch longer than the G17, but overall, they're pretty close in size.  The Glock feels slightly top heavy compared to my PPQ, but I won't know if this is a good or bad thing until I shoot it, and I have to confess, I don't shoot my Walther as much as I'd like to.

Now, I don't recall how my pal's G17 shoots, or how his trigger feels, but after dry firing my new G17 a few times, I've come to the conclusion it's not going to be one of my favorite triggers.  It felt gritty and spongy compared to the Walther, and certainly did not break like a glass rode.  But as I understand it, the Glock was designed to be abused and to be able to function under the worst conditions.  At 5-25m, I would imagine that as long as it goes bang when you want it to, it's all good.

For the few things I don't like about the Glock, there are about a million aftermarket solutions that support it.  There are probably just as many aftermarket companies catering to Glock owners as there are 1911 owners, so if there's something that's really irking me about it, I can probably have it sorted out.  That being said though, I'll probably shoot it as is, and probably not mess with it too much, if at all.

I have other pistols that I've tinkered with, but I have a feeling this one I will leave as it was designed.  It has a reputation for being a tool, a blunt instrument that's not the prettiest, not necessarily the most accurate or precise and fun to shoot, but it is supposed to be reliable that you could depend your life on it.