Once again, I have demonstrated how irresponsible I am when it comes to finances.  I sold my Beretta 92FS recently because it mostly sat in my safe.  I also planned on taking those funds to pay down some debt, however the money was in my account for no more than a few weeks before I went off and got something because it was on sale.

The Eotech EXPS3-0 in tan.  Why did I need this?  I really didn't.  I had been tossing the idea around that I would take my Elcan SpectreDR off my Mk18 clone and throw it on my ACR and getting an Eotech with magnifier for the Mk18.  I had some issues with ACRs, Optics and mounting options, but those issues have been resolved.

Anyway, the clone correct Eotech would have been this model for the Mk18, however because my ACR issues had been resolved, the Elcan was no longer needed elsewhere and could stay happily on the Mk18.  Actually, I was also looking for an excuse to swap out the Elcan to the ACR because I wasn't really happy with the shitty eye-relief of the Elcan.

The Elcan is a great optic, the glass is crystal clear, it's robust, and the controls are great.  There are three downsides though - it's expensive, it's heavy, and it has shitty eye-relief.  Money-wise, I got a good deal on mine.  As for the weight, I just have to grow stronger.  The eye relief though....well, I could probably dump the KAC back-up iron sights on my Mk18 clone and move the Elcan further back on the rail, but then it wouldn't really be clone correct with missing BUIS (even though the Elcan has BUIS built in).  I could also shoot the rifle with the stock collapsed more, but it doesn't feel right to shoot with such a short length of pull.

Anyway, I ended up grabbing this thing on a whim.  It was on sale, and I guess the seed had been planted so seeing it so cheap just pushed me over the edge so here it is. 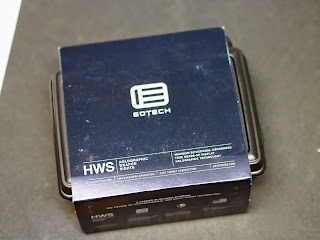 The optic came in a lockable hard case plastic box with paper wrap.  This might be overkill, because apart from getting it from the manufacturer to the retailer to me, I doubt it will spend much time in this case.  Schmidt and Bender sends their glass in bubble-wrap and a cardboard box with no issues. 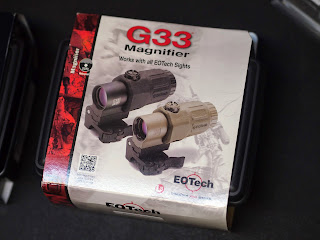 It looks like Eotech has been doing this for a while now as their older G33 magnifier also came like this.  The Aimpoints (and even my Elcan) came in a cardboard box. 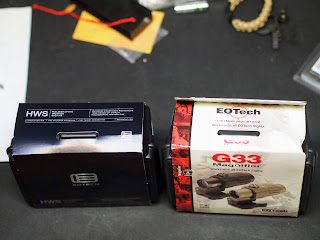 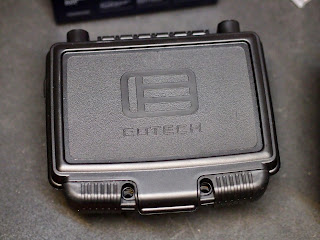 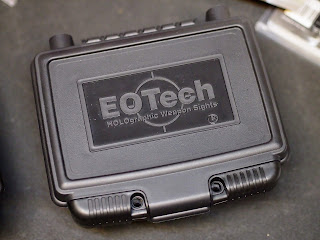 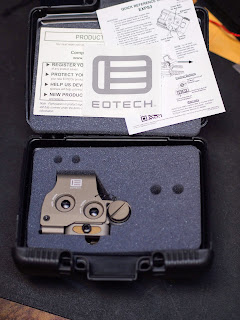 Inside the hard case, the optic comes in custom-cut foam, and included are the instruction manuals and a sticker. 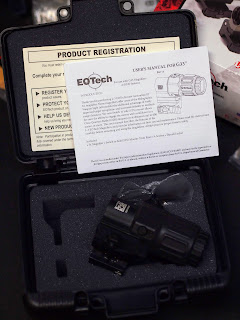 I think the sticker design is relatively new as my magnifier did not come with the sticker of the current logo. 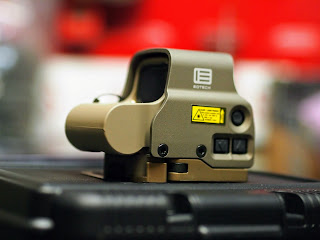 Come to think of it, I've only recently noticed this logo on Eotech products.  I like the new features of the EXPS over the XPS models.  Having the brightness controls on the side make it easier to access, especially if you have a magnifier right behind it.  The new QD lever is also a welcome feature.  Having to fasten your optic with an hex-key or flat-heat screw driver is so 1990s. 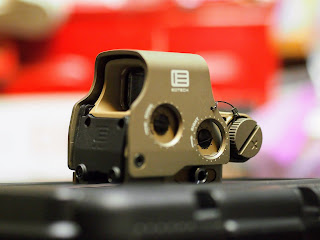 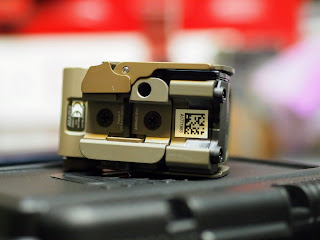 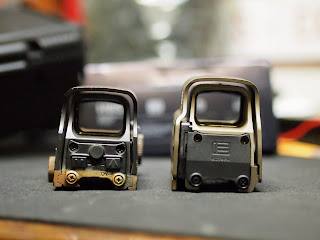 I pulled out my XPS2-0 to compare to the EXPS3-0.  I should have an XPS3-0 (or an EXPS2-0) for a proper comparison, but this will have to do.  For those that are confused by all the numbers and letters, the EXPS model is slightly bigger, heavier and taller because of the build in riser
/QD mount.  The taller mount also results in a 1/3 co-witness with iron sights versus the absolute co-witness with the XPS models.  The EXPS model also has the brightness and NV controls on the side, rather than the rear.  Apparently the EXPS model is waterproof down to 33ft versus the 10ft of the XPS model. 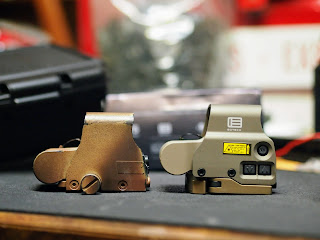 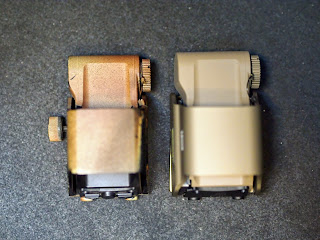 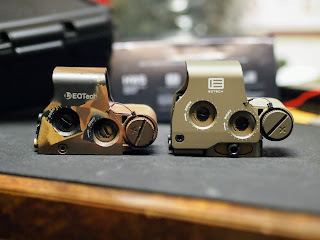 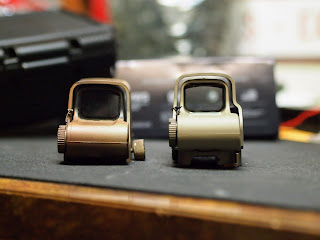 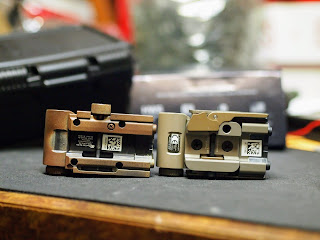 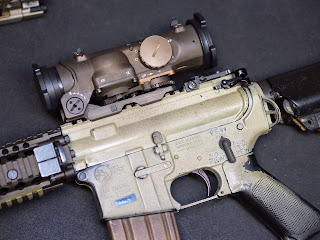 My monster Elcan, but honestly, it takes up about as much space as an optic plus magnifier, and might weigh about the same.  Cost-wise, the Elcan may come in just a bit more than buying the Eotech EXPS3-0 plus G33 magnifier. 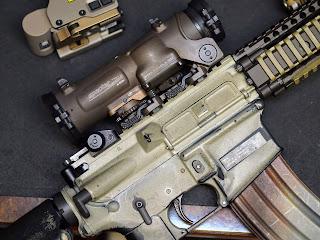 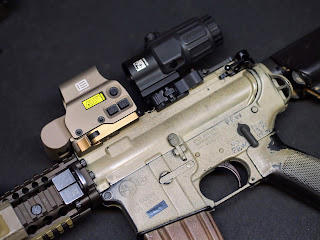 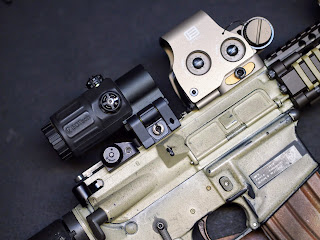 I'm not sure which set-up I like better, will have to test out both and see.  I built this rifle as a clone and not as a SHTF rifle, I have plenty of other rifles to choose from in that scenario.  I would say that there are probably equal number of Mk Block II rifles with Elcans as there are with Eotehcs, but that's just based on images I see on the web.  I have no idea what the real numbers are in the US military.

In terms of function and performance, I'm going to have to give the edge to the Eotech combo.  With the Elcan set up, I am plagued with eye-relief issues and also, because it sits lower (absolute co-witness), half of the sight picture is obscured by the PEQ.  With the Eotech set-up, there is no eye-relief issues (until I use the magnifier) and because the optic is taller, it clears the IR illuminator.

Again, I could dump the fake PEQ, the KAC BUIS, move the Elcan back, but then it wouldn't look like any of the Mk18s as issued.  With the Eotech set-up, it would resolve a lot of the issues, but I'm torn because the Elcan looks so much cooler, and let's be honest, looking cool matters, lol!

In all seriousness thought, if I keep the Eotech setup, I'll throw the spacer on the G33 magnifier.
at September 16, 2019