A buddy of mine passed these on to me, so I guess I'll have to build a few new clones....damn, lol!

The image of the pistol is still shows the Browning Hi-Power, but the description says it will be a striker fire pistol.  My buddy, who's the head gun plumber at my unit thinks it might be the Glock G19x or maybe the Sig M17.

I don't know anything about the Ranger Rifle to be honest and don't have a lot of personal interest in it.

It looks like the C3A1 and C14 Timberwolf will be replaced with something new, though the image still shows the T-Wolf.  Cadex recently developed their CDX-MX Kraken, and going by the history Cadex has with the CF, plus the C15 mid-life upgrade with the Cadex chassis, I wouldn't be surprised if that's what it ends up being.

As mentioned before, our Macmillan Tac-50/C15s received an upgrade with the Cadex Chassis.

Last on this page is the C20 from what appears to be Colt Canada.  I haven't done much research on this rifle to be honest.  I know we had Armalites in 7.62 at one point in time, but that's about it.  From what I know about the C20 is it's a Colt Canada MRR in 7.62, looks like it's cerakoted in FDE, Hogue grip, what looks like the LMT DMR stock, S&B 3-18 sitting in Cadedx Unitized scope rings, no BUIS.  For clone builders, well, the rifle will probably be restricted in Canada so it will limit the number of people who will want to build their own clone, considering non-restricted options such as the Stag 10 and Troy 102.  That being said, it will probably be easier to clone than the US M110, lol! 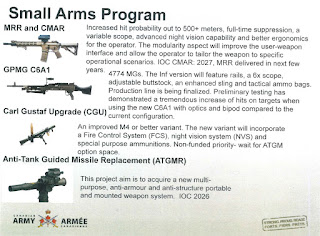 The MRR and CMAR looks to be replacing the current C7 and C8s.  The MRR's been out for a while and I'm not going get into it.

A couple of images of the MRR being tested popped up in the Ottawa Citizen article about the CF testing the new CADPAT: 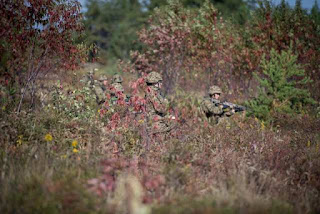 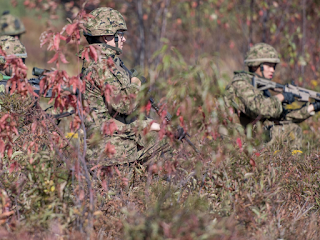 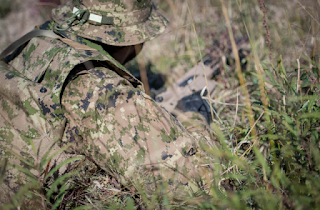 There are no optics apart from iron sighs in these pics, but according to the chart, it looks like an Aimpoint on there, but the description says variable scope.  This suggests to me something like the Elcan Spectre DR, not a fixed red dot plus magnifier.

Full-time Suppression?  Does that mean we're getting cans even for the regular rank and file?

Anyway, word around the campfire is we might start seeing these new rifles, even at the Reserve level, within the next 3 years.

I usually take this sort of information with a grain of salt, and believe it when it actually appears at the unit, but just in case, I might start collecting some Magpul furniture in FDE, lol!