Ho-Ho-Ho, Santa brought me a rifle for Christmas

Christmas was good for me this year, and Santa was cooperative.  Actually, I can't give too much credit to him as it was my wife that gave me the green light to buy this expensive hole-puncher, haha!  Plus I have to thank my buddy Jay for getting me off my butt to go out and spend the money, plus my buddy Hermes from Reliable Gun for helping me find some glass for this beast. 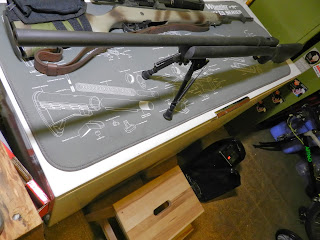 So, on Boxing Day, I was planning on staying home and vegging out, but at around mid morning, my buddy Jay sends me a message telling me he was thinking about going out to Wholesale Sports to "look around".  Whenever I get those sorts of messages from him, it can only mean trouble.  I replied to him that they were having a 10-50% off scratch and save sale and the deal was sealed, a few hours later, Jay, my wife, and I hopped in the car and headed out.

We walked straight to the gun counter and the first thing I spot is this Remington 700P off to the side with a price tag in red on it, sub $1,000.  I'd been toying with getting a bolt action rifle for some time now, and it'd been a toss up between a 700P or a 5R.  Both of these rifles retail for about $1200-1300 or so and both were beyond my means for a long time, so when I saw the 700OP, I asked to look at it right away.  The clerk noticed the price on there and said that the sale was over on the 24th, but since I saw the price, he was obligated to give it to me at that price.  On top of that, there was a scratch and save that guaranteed at least another 10% off.

There were two other customers, to my left and right who noticed the conversation, hovering like vultures, waiting to take a stab if I decided to walk away.  I could sense them in my peripherals.  Me being new to bolt action rifles, I looked over to my buddy Jay for some non-verbal advice.  He turned and said to me that he would kick me in the balls if I didn't buy that rifle for that price.  I knew it was a smoking deal as well considering it retails for $1,300 plus tax at Wholesale, and today it was going to cost me $980 tax in.  I think the best deal I could have scored on a normal given day would have been maybe about $1,200 tax in.

Within 5 minutes of walking into Wholesale Sports, I gave one look to the wife, got the ok nod, whipped out the credit card and told the clerk to wrap it up.  The vultures on either side of me dispersed, knowing there wouldn't be any meat left on this carcass to pick at. 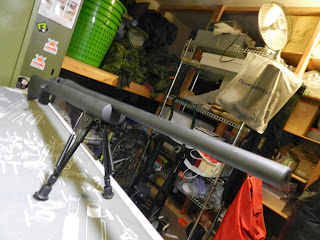 So, now I am a member of the precision rifle club.  Note how I didn't say precision shooter club....because I doubt I could hit the broad side of a barn from 100 meters away with my skills.  But getting the rifle was one thing, equiping it with a worthy peice of glass was another.  It seems to be a general understanding that you will probably spend more on a scope than the rifle itself.  I wasn't planning on getting the rifle for at least another year, so getting a scope at this point wasn't even in the realm of possibilities.

I went to visit my buddy Hermes from Reliable Gun.  It was strictly a social visit, and perhaps learn a thing or two about my newest aquisition.  Remember, I wasn't planning on getting this rifle until maybe the end of 2014, so getting glass for it and shooting it definitely wasn't happening for quite some time.  I was probably going to sit on this rifle for at least a year before I found a chance to shoot it.  Anyway, I got to the shop told him what Santa, or rather what my wife had got me for Christmas and told him eventually, I'd need to outfit it with a scope.  He kindly dug through his inventory and showed me something I could probably afford in the near future. 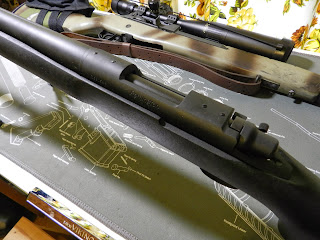 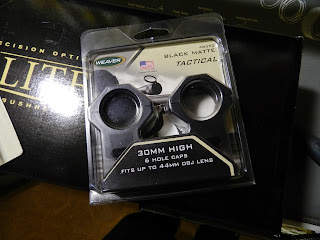 Some rings I picked up from Reliable....you can see where this is going.... 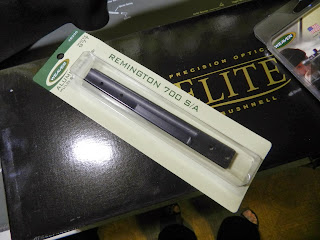 A one piece weaver multi-slot to go with the rings and my rifle.....nice shot of my feet there, sorry. 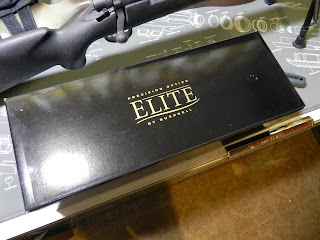 And the beast that I came home with.  I was not planning on coming home with a scope, but yet here it is.  I told Hermes that I didn't have enough $$ to get a scope that day, that I would have to wait out a bit and sell a few things in my inventory first and within two minutes, he made it all happen.  I went home with a Bushnell Elite 6500 4.5-30 X 50 scope and all the fixings (actually, I got the scope and rings from Reliable, but got the Weaver base from Italian Sporting Goods that same afternoon).

I ended up getting rid of my brand new Aimpoint Micro H1 and the new Larue Tactical LT660 QD riser, but I think it was worth it.  I figured I have a decent optic with my Aimpoint PRO with 2moa, and though the Micro looks cooler and it's lighter, it's a 4MOA and the set up costs $300 more.  Besides that, I had the PRO mounted on my 10/22, in the ARchangel G36 kit, which already weighed a ton with the bull barrel.  I decided to lighten the load on the 10/22 so I took the Aimpoint Pro off the Ruger 10/22 and put it back on to my AR.  Now I'll have to get a new optic for my 10/22, but I think a $75 Bushnell TRS-25 will do just fine - lighter and cheaper. 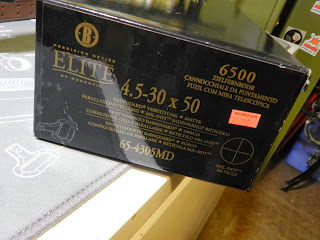 The sticker price for the Elite 6500 at Reliable was just over $1,000, but that's already cheaper than some places that have it listed at $1,400 or so.  I could have opted for the Elite Tactical version like on my M14, but the arguement here was, am I going to adjust it all that often once I have it dialed in?  Probably not is my guess.  I dunno to be honest as I've only tested it out on my M14 once, and that was before shimming the scope base.

Oh, I totally forgot to post an update to my M14 scope issues.  I took my M14 to the only M14 Doctor I know - Roy.  He's been shooting for longer than I've been alive and he knows M14s inside and out.  Anyway, for some reason, the scope I had on my M14 was sitting completely off centre for the longest time, and I took it to him to have a look.  After 3 hrs of mucking around on the thing, he came to the conclusion that the best thing to do was to shim the M14.CA CASM scope base.  Taking tin from a pop can, he straightened the thing out and two years of scratching my head vanished within seconds.  I still have to take it out to test, but I can visibly see a difference on how the scope now sits on my M14.  Thanks Roy! 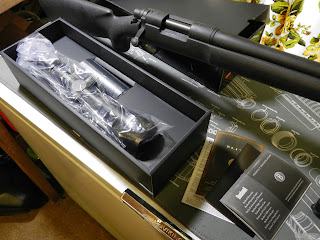 Ok, so unpacking this thing was just like unpacking of my Bushnell Elite Tactical.  For women, I'd imagine this is just like opening the powder-blue box from Tiffany's.  The scope wrapped in plastic, and neatly seated in cardboard cutouts.  The manuals and warrantee cards were inside and the huge sunsade was also neatly packed. 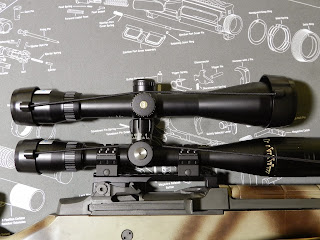 Compared to my Elite Tactical 5-15x 40mm, this new scope was definitely bigger.  Instead of the 1 in tube, this one was 30mm.  From what I've been told, it allows a lot more light through, plus the fact that it's a 50mm objective versus a 40mm, making for a better image.  Me, being the noob shooter, I doubt I will notice a difference.  We'll see when I finally get these puppies out to the range. 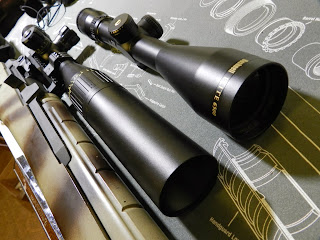 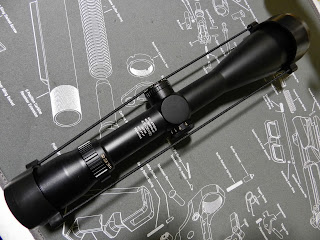 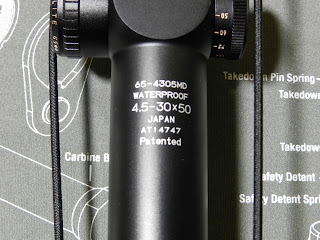 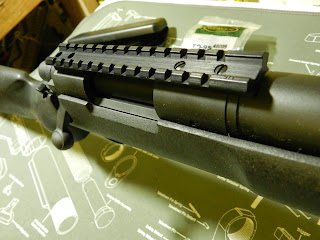 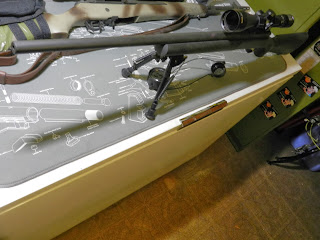 I also took the Winchester (yes, that was the brand) bipod off the M14.  One of these days, I might shell out for a Harris bipod, but I might just wait until I've outgrown this cheap $25 one.  In fact, it will probably take me years before learn to outshoot this current setup (rifle, scope, etc). 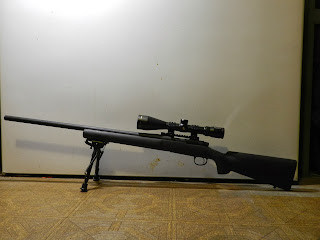 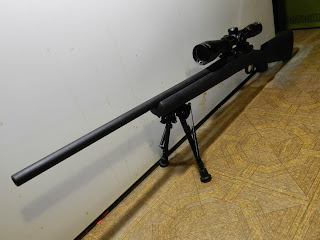 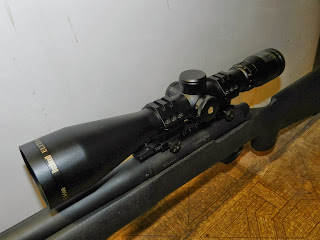 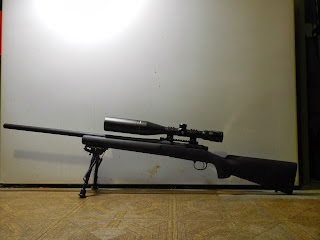 Like on my M14, the scope looks massive with the sunshade on. 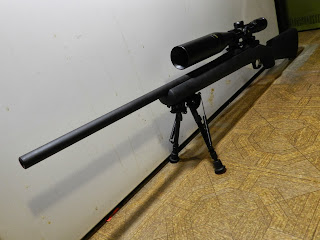 I hope to get this rig out to the range soon.  With any luck, I'll be able to land some rounds on paper without too many headaches.  Despite my buddy Jay egging me on to get this rifle, he hates Remington and is very pissed off with his SS BDL in .30-06.  Roy keeps saying he will change that one day, and I'm not sure what to make of it all.  I've heard Remington used to be good, but their QC has gone downhill lately.  I've also heard that their mid-range to high end models haven't suffered so I should be safe with my 700p.  That being said, Jay's rifle retailed for about the same price as my 700p and he wants to melt down his 700 for scrap.  We'll see when I take this rig out for a test drive. 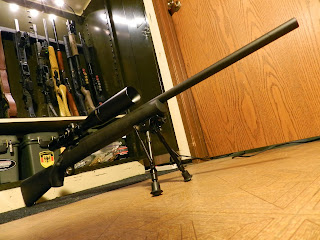 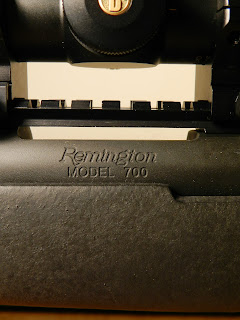 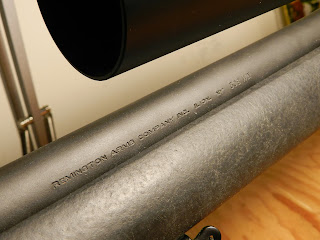 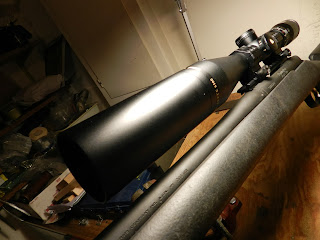