I have to stop ordering stuff online, it's so addictive, haha!  I ordered a bunch of miscellaneous stuff for a few different firearms and evertime a package arrices, it's like Christmas. 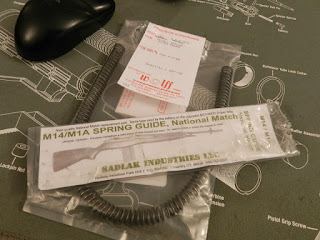 Sadlak spring guide for my M14, and a Wolff spring to go with it (because the factory Norinco spring was too thick). 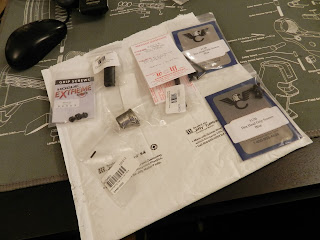 And a pile of miscellaneous pistol parts. 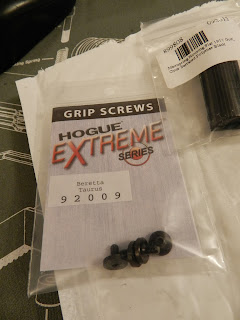 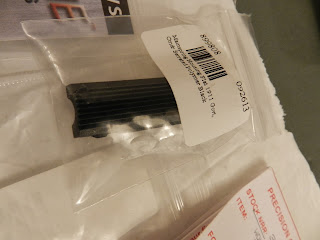 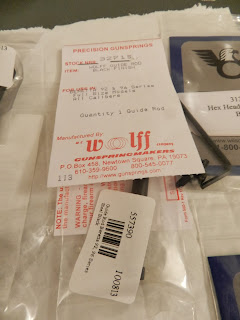 A Wolff guide rod for the Beretta.  The factory one was made of plastic, and it probably would have been fine, but I just didn't like the idea of it being plastic. 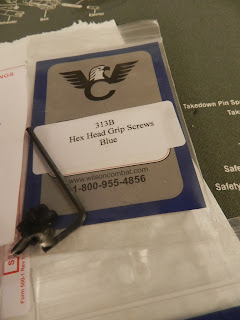 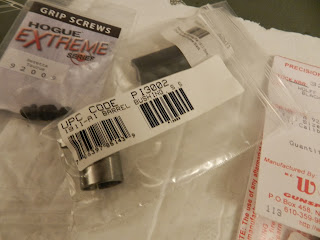 Stainless barrel bushing from Springfield Armories.  I got this one for my Norinco 1911A1 Police. 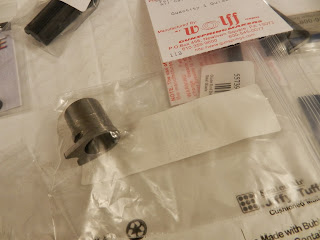 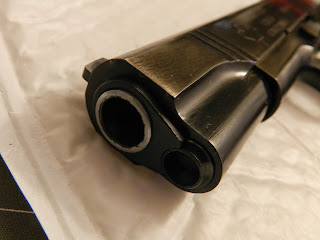 As you can see, the factory one is probably just blued, but it wasn't soley for this costmetic reason that I decided to replace it as you'll see later. 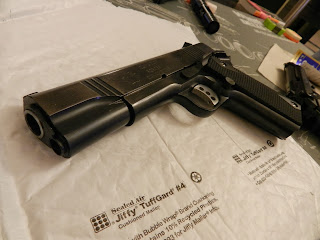 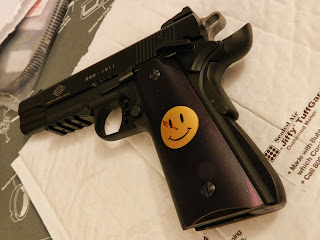 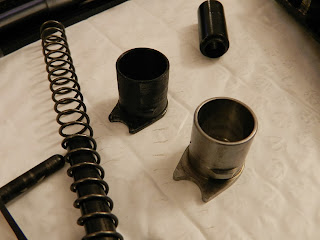 Not only is the Springfield unit better looking, it had a better fit surprisingly.  I figured I might have to do a bit of fitting, but it dropped right in and fit nice and snug between the slide and the barrel, as if it were custom made for my pistol. 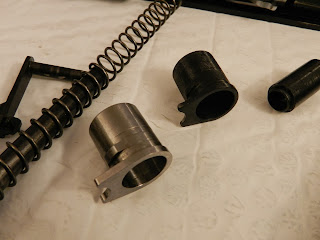 Here's another shot of it.  As you can see, the material on the face is thicker and the lines are more defined. 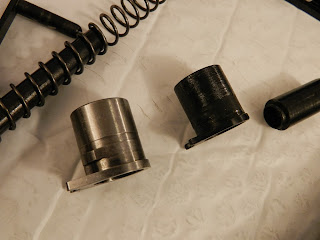 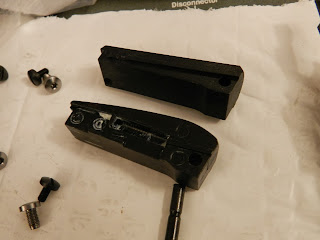 The main spring housings for my GSG 1911.  The top one is the new plastic unit from Colt, the lower one is the factory metal one from GSG.  I know, replacing metal with plastic is sort of opposite with what I said earlier with the Beretta guide rod, but I figured that the guide rod is a long, thin piece of plastic that's under repetitive stress and action, this one is not. 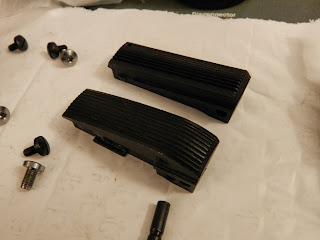 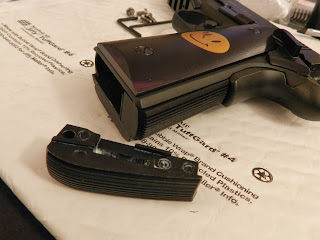 The new MSH installed in the GSG. 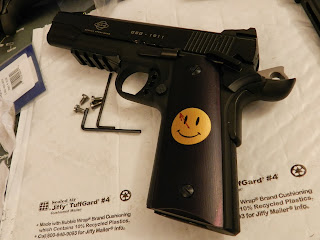 I orderd an extra set of hex grip screws for 1911s, but it turns out that GSG uses a different thread pattern and standard 1911 grip screws won't thread into a GSG.  Weird, and not something you'd think would be different, considering the GSG is supposed to be 80% compatible with standard 1911 parts. 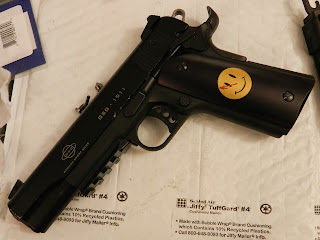 My GSG is starting to show a lot of wear on the slide.  It's known to have a cheap finish, and one other thing to worry about is the slide is made out of alluminum or some sort of alluminum alloy.  There seems to be a lot of wear where the slide meets the slide stop, and this thing has less than 5000 rounds through it.  I'm a little worried and might contact GSG about it. 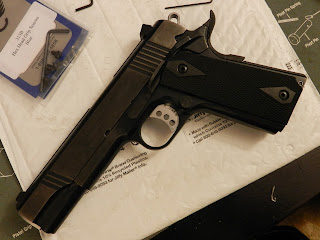 Here's my Norinco 1911A1 Police with the new barrel bushing and grip screws.  I installed the same grip screws onto my Remington R1 Enhanced.  To be honest though, having hex grip screws is more cosmetic.  If I sit back and think about it, having a flat head screw driver is just about the same as carrying a set of allen keys. 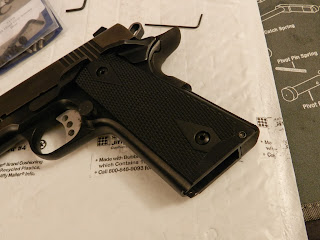 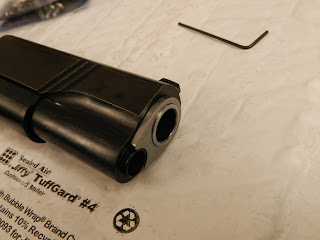 Now the face of my Norc is looking a lot better, similar to my Remington R1E.  Though the Remington is still light years ahead of the Norc in terms of fit and finish, and when you rack the Remington, it feels like butter, they both perform about the same at the range. 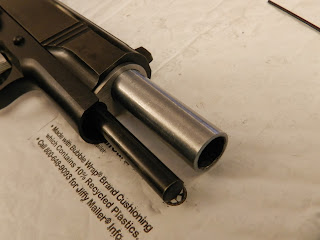 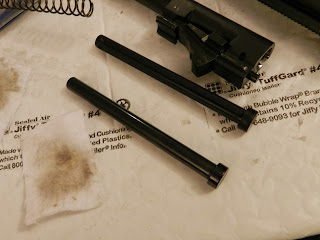 Here's a comparison between the Beretta guide rods, the steel one is above. 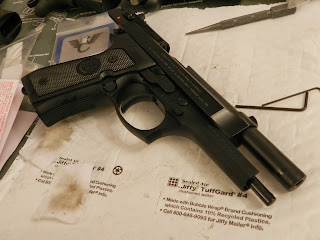 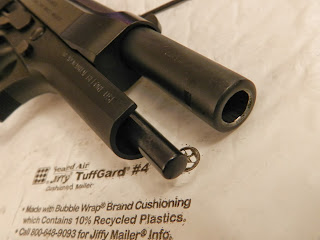 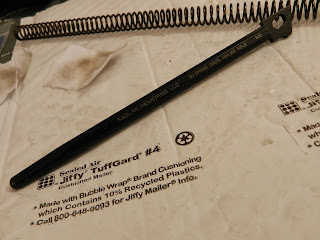 And lastly, here's a shot of the Sadlak spring guide and spring for my M14.  I didn't bother taking a picure of this part installed, but it dropped right in with no problems.  I don't shoot the M14 that often, and I'm not even sure I will detect any benefits from using this item, but it was fairly inexpensive (about $25 for the guide and $12 for the spring).  It does feel a lot smoother to rack the M14, but I'm not sure how that will translate to benefits when shooting.  We'll see I guess.
at December 30, 2013