The "D" spring I that I ordered from Firearms Outlet Canada arrived yesterday and I installed it last night.  I dropped it and wish I had actually measured the weight of the trigger pull before any mods because there is little noticeable felt difference between the Wilson Combat 18# hammer spring the factory 20# spring.  Then transitioning from the 18# Wislon to the 16# D spring, again, little felt difference.  I'm sure if I had a side by side comparison between the new D spring and the original 20# spring, I would probably notice a difference. 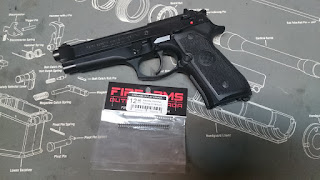 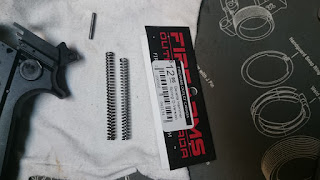 Visually, it appears that the D spring is shorter than the factory length spring.  I did a function test after assembly and it seemed to be fine.  I won't know for sure until I take her to the range and feed her some rounds though.  As mentioned earlier, I didn't notice much difference between the 16# D spring and the 18# Wilson Combat spring, but I should clarify that that was only in single action.  There is a noticeable difference between what I remember as a heavy pull in the factory double action versus the D spring double action trigger squeeze.  Again, I wish I had actually taken a measurement, lol!

For a step-by-step for swapping out the hammer spring, take a look here.