I bought a new Holosun a few months ago, but sold it along with the AR it was mounted to, but I was thinking that these were such a great deal, I sort of wanted another one.  I didn't really have a rifle that needed any optics however so I tucked that thought away in the back of my mind and left it.

So, I walked into Reliable Gun Friday afternoon to sign the sound moderator petition (http://soundmoderatorscanada.ca/?page_id=25 but there seems to be an electronic version as well https://petitions.parl.gc.ca/en/Petition/Details?Petition=e-575), and as luck would have it, my buddy Hermes showed me something interesting. 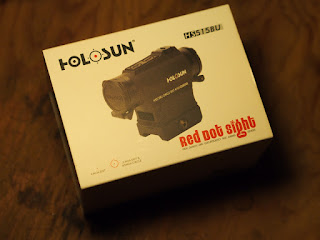 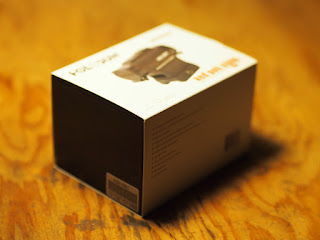 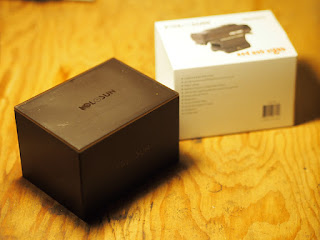 It was the Holosun HS515BU.  My previous one was the Holosun HS503GU which had a lot of great features already.  My previous model had the housing design that shrouds the windage and elevation turrets, it had the side battery turret (as opposed to other models with the captured battery compartment underneath the optic, sandwiched between the optic and the mount) and it had both low rise and 1/3 co-witness height mounts.  The previous model was compatible with Aimpoint Micro mounts as the base of the optic shared the same footprint and mounting screw spacing.  Anyway, for more information on that one, see here:

The Holosun HS515BU retails for $359.99.  Of course, it was on sale for $274.99, but I know you’re thinking, that these made-in-China optics are creeping up there in price.  They are definitely more money than your off-shore made Bushnell red dots (TRS-25, which I still use on some of my shotguns), but they are still far economical compared to some of the big brands like Aimpoint and Eotech.  Anyway, this isn’t a comparison between Aimpoints, Eotechs and Holsuns, just a simple unboxing.

So, what does the HS515BU ($359.99 retail) get you over the HS503GU ($250 retail) and what do all the letters and numbers mean?  Well, near as I can tell, the HS probably stands for Holosun, and the 515/503 is the model number.  With the HS515BU, I found out the B signifies the unit uses an internal, but accessible battery tray.  This is a neat feature because it reduces the overall width of the optic, but unlike previous models, you don’t need to dismount the optic to access the battery.  Two tiny Philips screws keep the tray in place, and when you need to replace it after 2 years of having the thing constantly on (insane battery life, right up there with Aimpoints).  The G in the HS503GU simply identifies the model as having the standard side turret battery compartment (just like the Aimpoints).  The U in both models it is the new shrouded windage and elevation turret design. 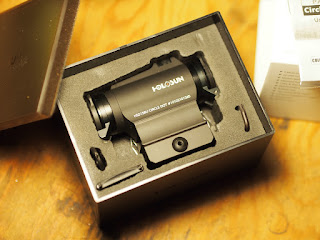 In the plastic box, you get the optic, instruction manual, lens wipe, an extra battery tray, a small tool with a flat end for the battery tray screws, and a large flat end to help pry the batter tray out (you could use your fingernails after unscrewing it, but why), a torx key to dismount the optic from the mount if required.  I think the location of the battery compartment is probably the main feature that differentiates the HS515BU and the HS503GU.  It’s nice that the optic doesn’t take up as much space with the internal battery compartment, but that also means that you won’t be able to simply unscrew the turret by hand and drop in a new battery.  Not a huge deal, and definitely better than previous models where the battery compartment was completely captured. 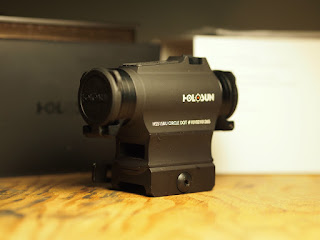 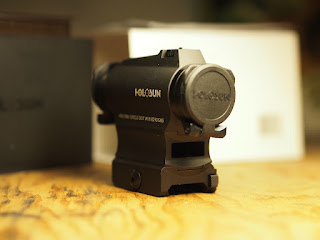 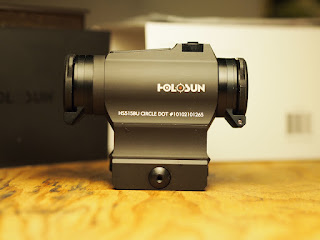 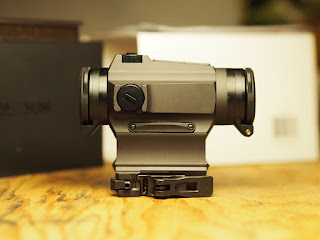 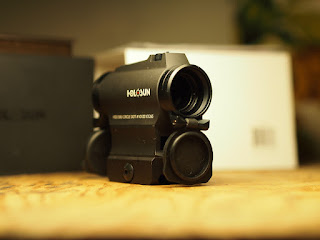 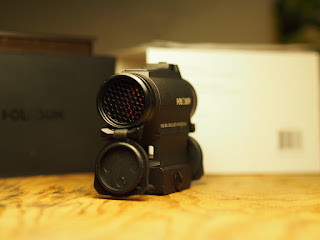 The HS515BU also comes with a few extra goodies that the HS503GU does not – flip caps, a kill flash, and a QD mounting base.  The flip caps are nice in that you won’t have to worry about losing your bikini covers.  They are screwed in and can be timed in various positions.  Mine came from the factory so they flip downwards but as mentioned, you can configure them in any direction.    The downside of the flip caps is that if you mount a magnifier behind it, you will have to mount it a bit further back to allow for the caps to flip open.  I think this might be asking a bit much, but for the next generation, I think Holosun can borrow another feature from the Aimpoint playbook and have the rear lens cap clear like with the Aimpoint PRO.

The kill flash is handy I if you were on a two-way range and you wanted to prevent reflection from your optic, exposing your position to the enemy.  But let’s be honest, a lot of Holosun users will likely be using their red dots on a range or at a competition, without rounds coming back at them.  Still, I suppose it’s better to have and not need than need and not have.

I may yank the kill flash until I see signs that the zombies are coming because it’s not like the kill flash just disappears when looking through the optic.  The mesh is very visible indoors and almost takes away from the red dot at lower power settings. With the magnifier, the mesh disappears, I guess that’s just how magnification works as your eyes just focus on objects further away. 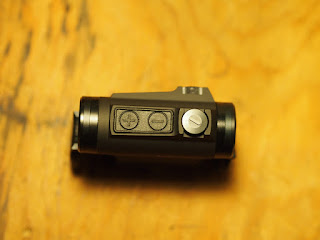 The brightness setting comprises of two buttons on the top of the optic, just like the HS503GU.  Push both buttons to turn off the optic.  Apparently there is a feature to switch between red dot only and circle dot reticles, but I usually just leave the circle dot on. 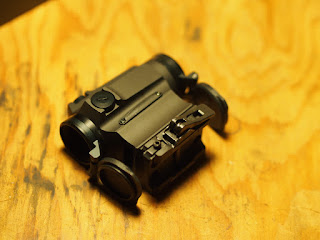 The new mounting system looks great so far.  There’s a spacer that appears to be removable so you can mount the optic in a lower position, and the base has what appears to be a solid mount with a QD feature that allows you to dump the entire optic in a hurry.  I’m not sure if it will hold zero as well as the Larue or ADM QD bases so that will have to wait for a day on the range.  If it works out, then that would negate the desire to replace the mount with a LaRue or ADM unit and save a pile of cash. 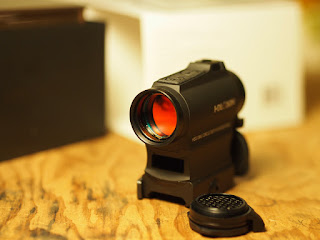 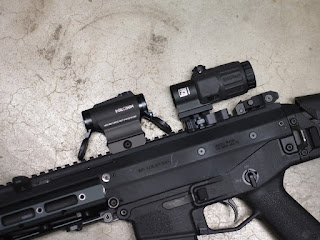 Anyway, looking forward to trying out the new optic.  I said before that I didn’t have anything to mount it to, but I’m still not 100% decided on which optic to mount to my ACR.  I’ve had a 2MOA Aimpoint PRO mounted to it, I’ve had a Bushnell AR Optics 1-4x24mm Throw Down PCL, I’ve had a Leupold 1.5-4x20mm Mark AR, as well as a Burris XTR 1-4x24mm so I’m going to try this out with a magnifier and see.  The ACR is pretty heavy as it is, so I’d like to see if I like it any better with a light weight red dot.  I can easily remove it because of the QD and run irons, or I can add my QD Eotech G33 magnifier if I need to reach out further.  The only downside is the dot will cover a 2in area at 100m, so if I want to see how the ACR is for precision, I’d probably still have to get a proper rifle scope one day. 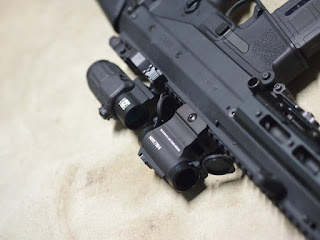 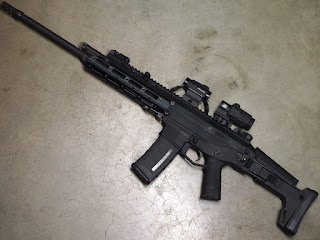 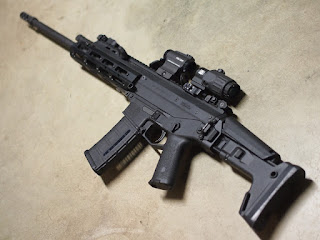 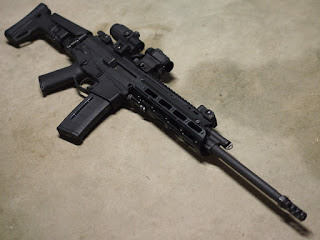 Some specs from the manufacturer: