I took a chance before on an Airsoft handguard for my ACR, and I’ve had it on there for just over a year now and so far no issues.  Guys from ACRForums.com down in the states have also been running this hand guard for a few years, also with no issues.  It’s made from one piece of billet aluminum and is a replica in appearance to the Remington ACR hand guard.  It’s lighter than the factory cheese grater and aesthetically speaking, it just looks better.

Ever since I swapped out the factory 16” barrel for the NR 18.5” barrel however, I’ve felt the hand guard was a little on the short side.  It would look great on a short 10.5” or 14.5” barrel, but with the longer barrel, I’ve been craving a little more real estate, and maybe even mount a bipod on it.

Another hand guard the guys in the states have been using is the Magpul PTS long handguard.  PTS stands for professional training system, in other words, Magpul’s Airsoft line.  I’ve had bad experiences with the PTS line as a set of MBUIS cracked on me so I was hesitant to try anything plastic from Magpul’s PTS line, but again, given its track record with ACR owners down south, I was tempted.  I understand that a few Canadian ACR owners have also been running the longer airsoft handguard for a while and so far, no one has reported any issues. 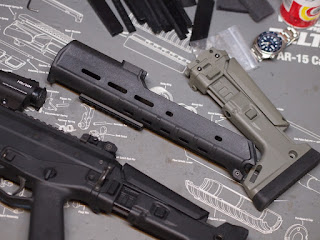 Anyway, someone was selling a handguard and stock for $30 (I’ve seen this hand guard alone sell for $100) so I jumped on it.  I just wanted the hand guard, so the stock was just an interesting piece of plastic I’ll get to later. 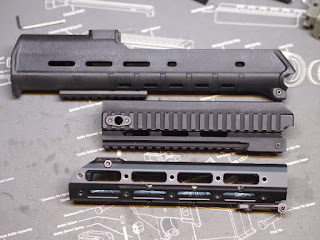 A comparison between all three hand guards that I have.  I know there are a lot more options than a few years ago, including a local Richmond guy who’s now making CNC handguards for ACRs (RPM I think?  Available through Reliable Gun). 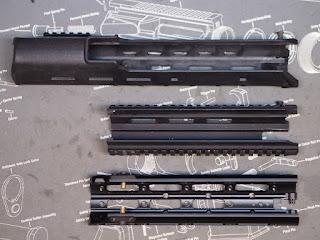 None of these hand guards had heat shields in them, including the factory cheese grater.  I’ve heard that the shorter factory plastic handguard does come with a heat shield, and I’ve heard of guys swapping the shield over from the factory unit to their longer Airsoft units, but I’ll save that project for when I actually find one.  They’re apparently far more desirable than the cheese graters. 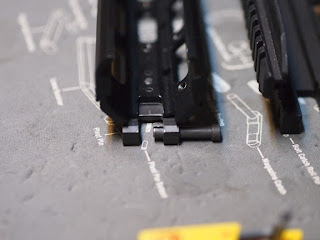 The retaining pin on the aluminum hand guard is held in like the HK pushpins but can be taken completely out of the hand guard. 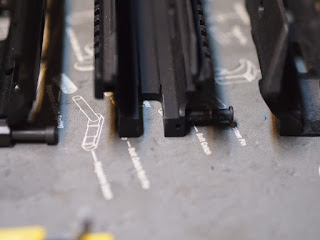 The factory cheese grater is captured, but there is a way to remove it. 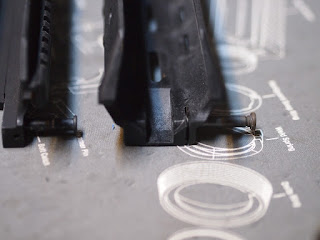 The plastic PTS unit is captured as well, it looks removable just like the cheese grater, but I don’t think I will need to.  All three retaining pins lock firmly into the receiver so I have no concerns about them. 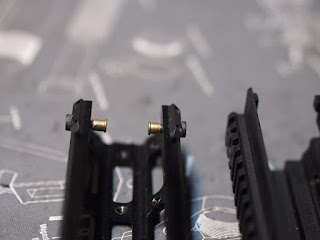 The only thing that is a bit sketchy is the front end of the aluminum airsoft hand guard.  The pins are too small to mount to a real ACR and I had to rig some spacers to make it work.  It’s held on so far, even after some abuse, but I’d like to find a better way to secure the spacers.  The guys in the states use M5 screws, but I haven’t messed around with those yet. 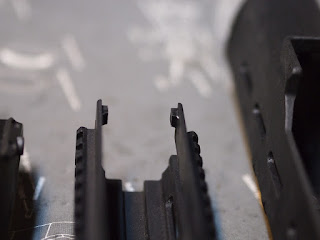 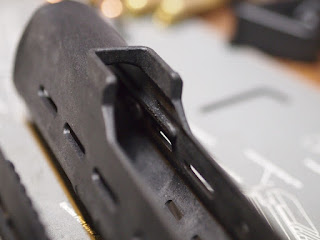 The Magpul PTS handguard is made of plastic, but it’s a perfect fit to the real ACR and there is no wobble whatsoever.  It locks firmly in place so I have a feeling it probably won’t give me a lot of issues down the road. 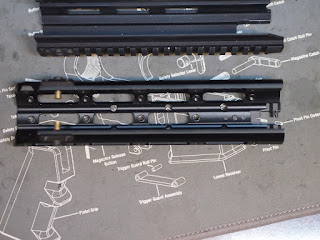 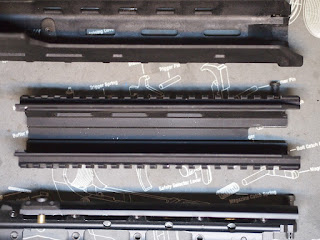 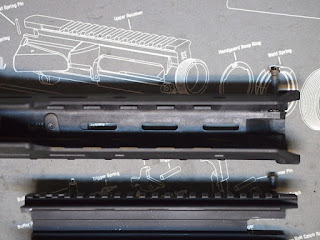 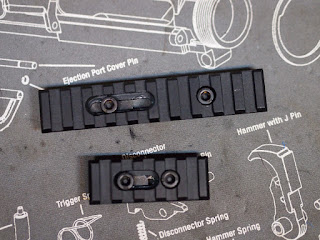 The PTS handguard came with two sections of pic rail.  They’re heavy and don’t feel like aluminum, but as I had nothing to attach to these rails, I took them off the hand guard and threw them in my spare parts bin.  I may attach a bipod to the ACR one day, but I’ll leave it naked for now.

I don’t have much interest in using the airsoft stock, and I’ll probably end up flipping it back on some airsoft forum or something, but I thought maybe I should give this thing a once over and see what it’s about.  I’ve done a comparison between the airsoft ACR and the real deal before, but didn’t pay all that much attention to the stock. 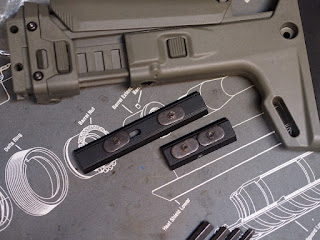 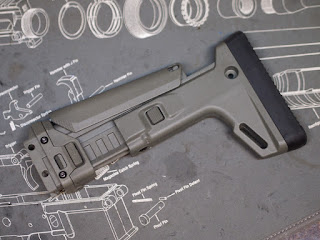 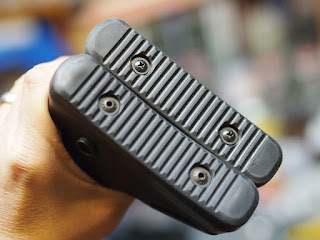 Well, here I was again, looking at the two and having a hard time discerning the differences, other than color.  The airsoft one uses Philip screws to keep the rubber butt pad on as opposed to the hex heads. 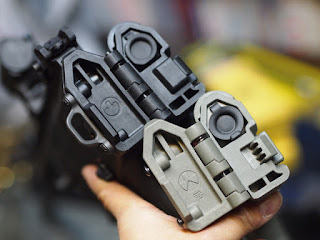 Fold the stock and they look nearly identical.  The Magpul emblem is of a different design from their PTS line. 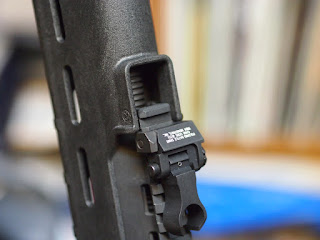 Anyway, back to the hand guard.  I had to move my front backup sight back a notch because of the new handguard. 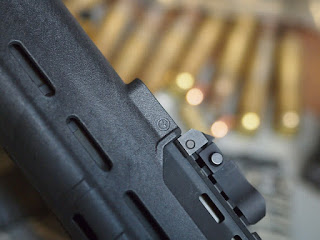 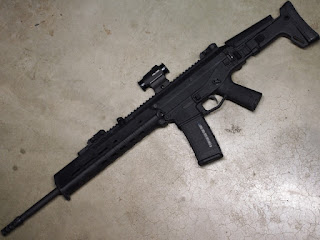 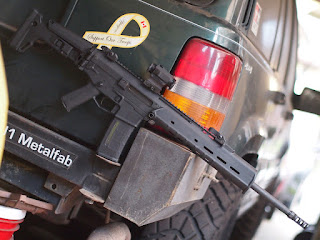 I had an Aimpoint PRO on the ACR for a while, and recently I threw on a Holoson, but now I may throw on something with a finer reticle and more magnification than a 3x flip-to-side. 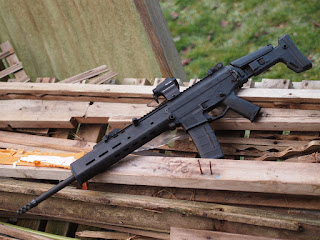 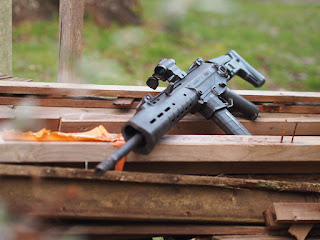 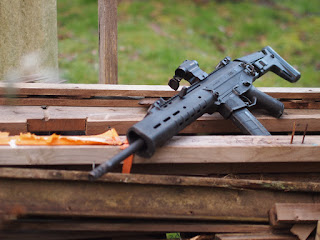 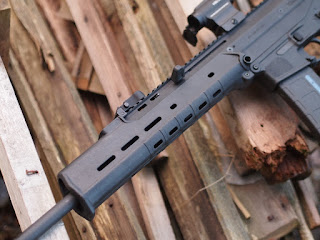 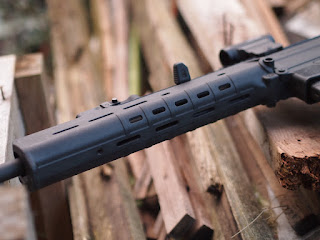 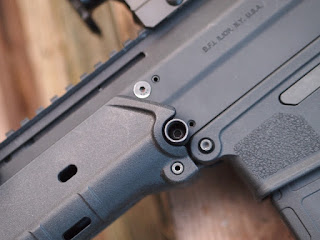 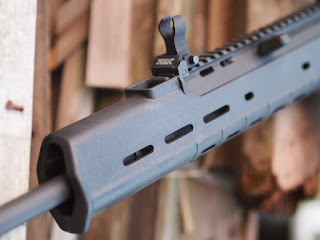 Overall, I’m satisfied with the PTS hand guard.  It’s ergonomically pleasing and if I want to mount a bipod closer to the muzzle, I now can.  Something I haven’t mentioned is that it’s light.  Way lighter than the cheese grater, but at the same time, it felt sturdy and fairly robust.  That being said, time will tell how well the plastic holds up.  Lots of people have used these, and I haven’t heard of any reports of any catastrophic failures, so we’ll see.