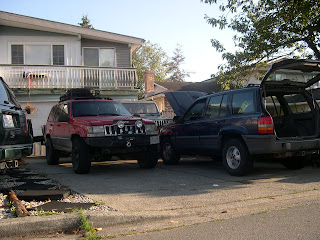 Well, what can I say about this beast? It's certainly not refined like my previous vehicles, but it gets the job done. I needed a winter car, because the snow and salt was killing my little first gen Civic, and my friend Justin was getting tired of fixing it every year. My buddy Jay picked up a Grand Cherokee a few years ago, and had me sold on the idea of getting one for myself. Being broke as I was, and unemployed for some time, I was in no position to get anything really expensive. Jay looked all over the place and finally found one on Craigslist for dirt cheap. I guess I shouldn't complain too much since I didn't pay very much money for it and without my buddy's help, I'd probably be still without a decent winter car...but I think I have to gripe a little. So, here's the Jeep, and we went to check this thing out in the evening, and I was pretty much sold as soon as I saw it.....what can I say, it was cheap. 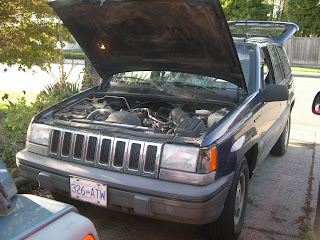 Sure, there were a few bits here and there that weren't great, but that was okay. For example, some of the light lenses were messed up: 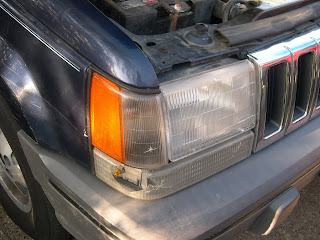 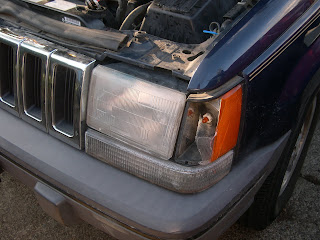 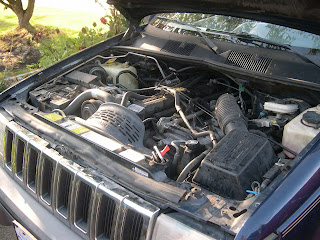 The engine sounded great because it was apparently rebuilt recently, but I found later it had a few quirks. The heater core was bypassed because it was leaking. My friend Justin ordered a new heater core for me, and my buddy Jay helped me install it.....what a pain in the ass. I'll post more info on this later. Oh, what else, the battery was completely pooched. It smelled like really bad farts, boiled eggs and sulfur. Then it died and so I got a new one. 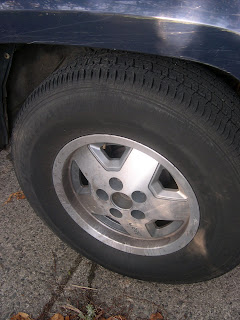 This Cherokee looked a little....off.....when I got it, and I couldn't quite place it. It looked almost lowered because everytime I pulled up to another Cherokee, I always seemed to be looking up at the other vehicle. Maybe because my tires were small, or maybe because the top coil on the driver's side front spring was cracked off. We nick-named her loppy because she was a bit lop-sided. Jay helped me fix that later. 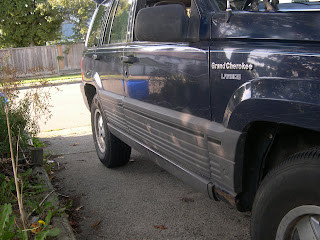 Note the beautiful "West Coast Pinstriping". There was a missing part of the side moulding, and the other side is missing the entire bottom section. Well, I'm not too concerned about the finish on this car, after all, it is a winter beater. Like Jay, I take pride in the filthy appearance of this car. I haven't washed it since I got it, not even once. For those of you who know me, you can attest to how anal I am when it comes to my vehicles. They're usually washed and waxed before the ink on the insurance papers are dry.....not this one. 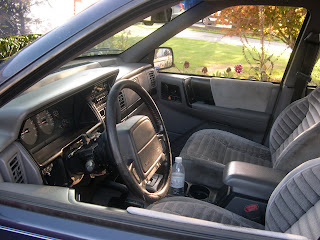 Moving on to the interior, note the steering wheel appears straight, but when I drive, it's almost at a 45 degree angle.....not a big concern, sort it out later. The leather wrap on the wheel has either been torn off or worn out really bad. Fixed that with a nice generic Crappy-Tire vinyl wrap. The seats were really worn out, and the bolsters and supports were all collapsed. Two of the door panels were cracked so when you pull the handle to close the door, half the panel would come away from the door. Also, I'm not sure if it was the seats or the carpet which was the source of the weird smell...... 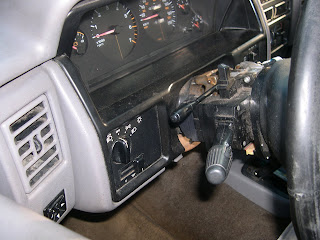 I was stopped by police one night and they suggested the truck may be stolen. After calling it in and looking at my insurance papers, I finally convinced them that I did indeed own it. My friend Justin helped me get a new cover for the steering column. 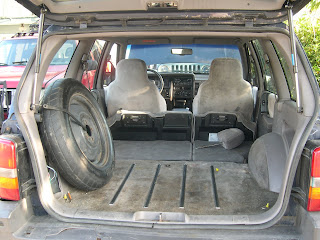 Lovely carpet? Not so much. The truck was handed over relatively clean in appearance. The previous owner seemed to have put the effort into possibly washing the truck, vacuuming it, and cleaning the interior with something, but it had some funky odor to it. It smelled of strong chemicals and something rotting. He told me that his dad had taken it hunting a few times, and perhaps a dead animal spent some time bleeding in the back (we found a few .22 cal bullets along with some spare change, drill bits, sockets, and sunflower seeds underneath some of the seat cushions). The carpet was pretty minging. I took the floot mats out one day and tried to smack some of the crap out, and it filled my entire yard with clouds of dust (This really pissed off the neighbors) so the next time I hosed them down with soap and water....my driveway was soon covered in mud.

You know, even though I said I didn't care about the truck's exterior, I do care about the interior. The first thing I did was vacuum the seats, carpet and floor mats, sani-wipe all the interior panels, and Febreze the hell out of the seats and carpet. The car still stank of rot and chemical cleaner though, just a bit fresher. The tail light lenses were all intact, but the bulbs were mostly burnt out and the wiring was all kinds of *ucked up. Justin sorted that out the night I brought it back and now there's no problems.

Wow, that was a lot of griping, but all in all, I'm quite happy with the vehicle. And considering the price, I really don't have a right to complain, especially since Jay went to so much trouble finding it for me. I'll post more updates as we go a long.
at December 09, 2009