I've wanted one of these for quite a while, but just never got around to getting one.  Then over the years, I've watched the prices go up and up and up, but I still wasn't overly concerned because there was always the IOP, and used ones popping up in EE once in a while.  But earlier this year, the prices on these things went full retard, and the cost on them increased nearly $1,000.  This was on account of Elcan's "price correction" or something to that effect.  A few years ago, I could have gotten one retail for about $1900 tax in, today the 1x, 4x in FDE goes for about $2,850 plus tax.

I went into a panic and started to look around, basically finding nothing at last year's retail price point.  Coretac Solutions has them listed at 2016 prices, but I could't add any to the shopping cart.  I contacted Armament Technologies and the new IOP listing had them at about $2,600 plus tax, that's about $400 more than 2016 retail pricing.  WTF.

So my buddy Alex says he wants to swing by DS Tactical for some new clothes because his old stuff doesn't fit him anymore (sounds vaguely familiar after becoming a dad).  What's the harm in looking right?  He also wants to check out the new Vortex PST Gen IIs.

We get there and go straight to the optics section and there are a few SpecterDR scopes sitting in the display case, at the new pricing.  Martin hears me grumble about the price as he's digging around for a PST for Alex.  I ask him out of morbid curiosity about the IOP and the price increase, and he tells me that he thinks he has one still at the old price.

I'm thinking shit, why did I ask this question, I wasn't prepared to spend that kind of money at that moment, but he did say maybe, and just maybe he didn't actually have any left at the old price.  My buddy Hermes from Reliable Gun told me about one he had in the shop a few days ago, and it was literally gone in seconds.  Well, no such luck, Martin says he's got one one left, in FDE.  Fuck.

I've been bit by the clone building bug and it's an expensive undertaking to say the least.  I've slapped together passable clones of the Mk18 Mod 0 or CQBR, and most recently did a Mk12 Mod 1 clone (sort of), but when I was collecting parts for my Mk18 Mod 0, I had it in the back of my mind how cool it would be to do up a Mk18 Block II which could be topped with an Elcan SpecterDR as an option.

The Elcan C79 on our C7s is not too bad an optic, considering it's a fixed 3.4x.  I was able to make hits at 500m, so I ended up getting one for my C7A2 clone (my SA20), albeit with spent tritium.  The SpecterDR is light years ahead of the C79.  They've improved the mounting system, installed adjustable metal BUIS (looks like you can position them at the 10 o'clock, 12, o'clock, and 2 o'clock positions), and added illumination so now you have to replenish a battery instead of the tritium.  The new reticle also accounts for bullet drop at different ranges, and best of all, they've added the option of 1x magnification or 4x magnification with a flip of a switch.

Anyways, back to Martin grinning back at me knowing I'm going to walk out of the store with it, I bite the bullet and grab it.  Let's just say the old pricing isn't the old pricing of a few years ago, but what I paid tax in is still better than today's IOP before tax. 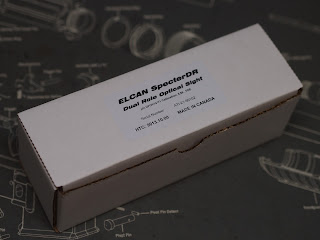 So, there have been tons of reviews of these scopes, in the field, real world accounts, youtube reivews etc.  This is just a simple unboxing from the point of view from a guy who has little experience or knowledge of a very expensive toy he just bought, lol! 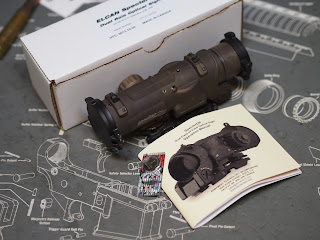 The box is plain cardboard, no special graphics on the box, nothing fancy at all.  Basically, it's all business.  The Elcan came with an in depth instruction manual and a battery, and that's about it, lol! 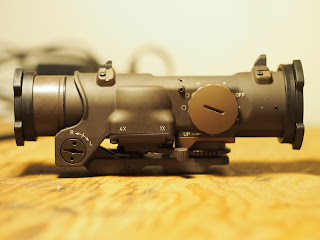 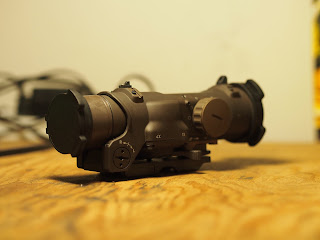 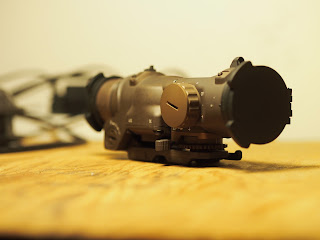 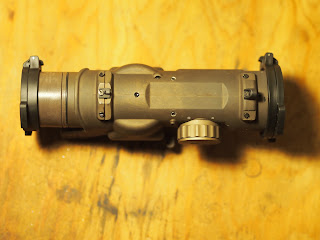 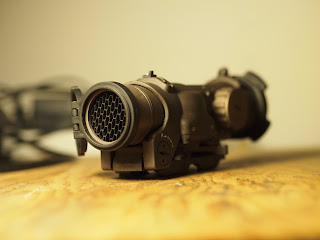 I have no idea if the kill flash and the Tenebraex scope caps are standard with these scopes, but they came on the scope and I didn't complain.  There was also a killfash thrown in, and I never say no to free stuff.  Actually, I've mentioned this in another unboxing of a Holosun red dot that came with a kill flash, but I find that unless you find yourself on a two way range, you probably won't benefit from it.  Some say it's better to have and not need than need and not have, but in this case, I may sacrifice giving away my position for better visibility.  My eyes are crap as it is and I want as much light to come into the objective as possible.  I'll have to figure out a way to see if I can still use the flip caps and lose the killflash. 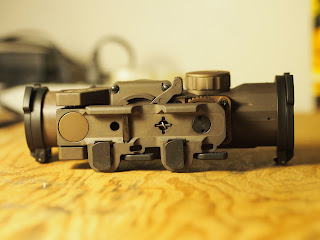 It looks like Elcan carried over that spring they used between the C79 and the C79A2 bases, supposedly locking the scope down and preventing the loss of zero as with older models of the C79.  I also like the A.R.M.S. mounts over the original wingnut design on the C79s and C79A2s. 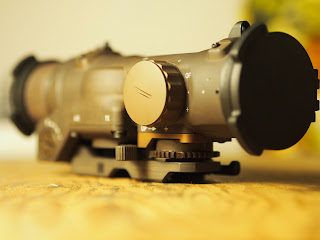 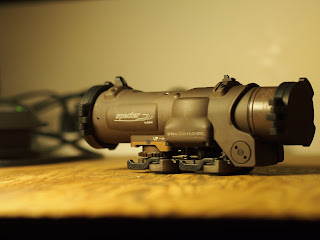 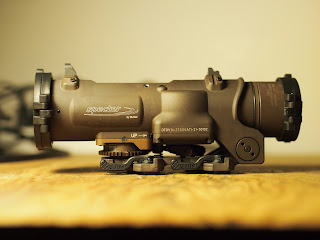 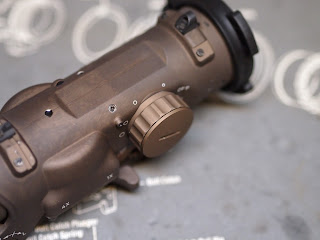 So, after I got home, I opened the box again to take these pics and I noticed that my scope somehow looked different than most SpecterDr scopes that I've seen online.  The battery compartment on mine looked slimmer than ones I'd seen before, so I did some research and it turns out that this was a new design for 2017, utilizing a commonly found CR2032 battery.  The new illumination system supposedly doubles the previous battery life, providing 600hrs of the illuminated center dot, or 6,000hrs of the whole reticle on low setting. 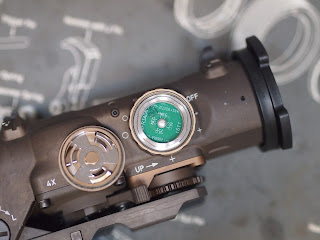 As you can see from a stock photo grabbed online, the previous gen's battery compartment is quite a different design:

The new battery compartment makes for an overall slimmer profile of the optic.  So, for owners of 2016 Elcans that are upset about not getting in on the newer design, send your Elcan back and for $100, they will upgrade your batter compartment.  For SpecterDRs produced prior to a year ago, but still within the last 5 years, the upgrade will cost you $200, and models older than that are not upgrade-able because the internals are apparently too different to modify.

Anyways, I'll have to figure out what the hell I'm going to mount this thing on.  I'll be damned if I end up starting a Mk18 Block II build, that ought to seal the deal on a swift divorce, lol!

Some specs from the factory, and it looks like the're still listing the older model because of the battery life: