A few things showed up in the mail today.  First was my new T-Rex Arms light-compatible Ragnarok holster with RTI Hanger for my Sig M17. 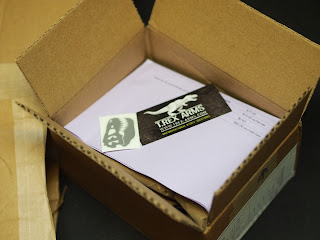 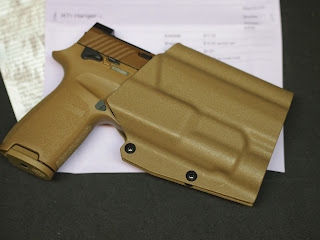 This is the first holster I've owned that is light compatible, in my case, the Streamlight TLR-1 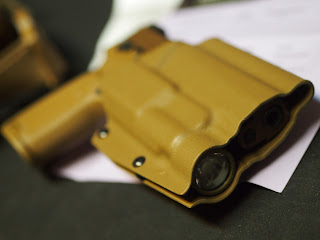 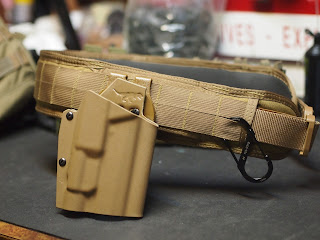 I don't know what I'm talking about when it comes to holsters and belts, so I'll have to learn as I go, and hopefully I have something intelligent to report later on. 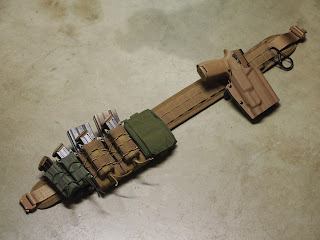 So this is my belt setup so far.  Pistol mag pouches x 2, double decker tacos x 2, a dump pouch which is a bit cramped in this pic (I shifted it over since I took this pic), and on the other side, my new holster.  I'm thinking of getting a first aid pouch too, and I'm hoping my doctor pal will be able to help me put something together and show me how to use it.

Other things I've considered adding is a multi-tool and maybe a knife?  I'm just tossing ideas around based on what I've seen other people do, but I guess I won't know what I need until I use it for a while.  I also don't want to weigh the thing down with things I may not need, 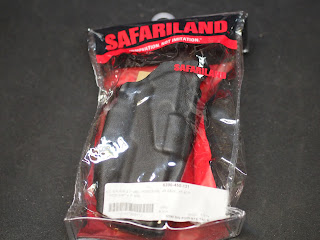 The other toy that came in the mail is a Safariland 6390 ALS Mid-Ride Level I Retention Duty Holster.  I think I got a pretty good deal on it, $60CAD shipped to my house.  Safariland lists this thing for $124 USD, I found it at Copsplus for $93USD and I found it on amazon.ca for the ridiculous price of $397 CAD. 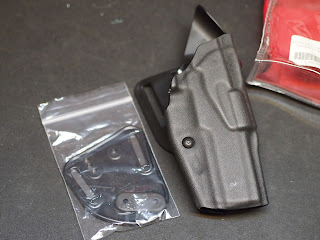 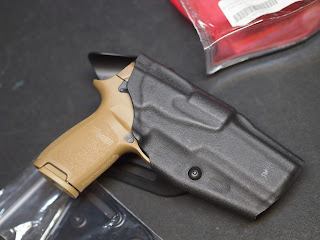 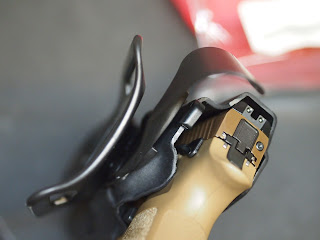 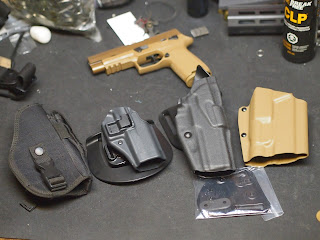 A comparison of the holsters I've been introduced to.  From the left to right:  Condor Tactical, Blackhawk Serpa, Safariland 6390, and T-Rex Arms Ragnarok. 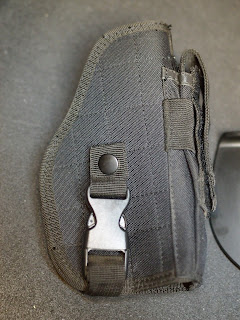 My first holster, a Condor Tactical unit probably more suited for airsoft.  It might be a clone of some of the older Tactical Tailor holsters or some other company but I remember seeing this style of holster back in the 80's.  If you're going for that retro look, this will probably fit the bill.

I bought this thing ages ago, back when I didn't know anything about firearms, and even used it for a few three gun matches.  Nobody pointed and laughed, at least not to my face, lol! 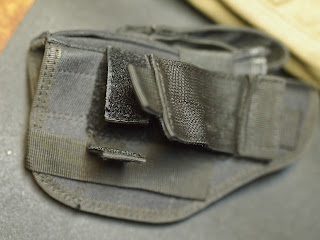 It mounts to most belts with this Velcro set up and to be honest, I've never had it move around once it's strapped in.  The thing originally came with this Han Solo thigh rig, and it was absolute garbage because it would flop around just when walking, never mind running. 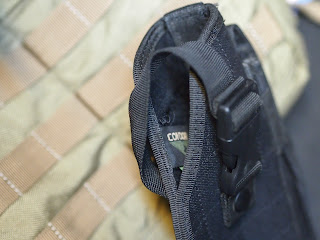 The pistol is locked in with this buckle thing, beyond that, it's just friction retention from the nylon assembly. 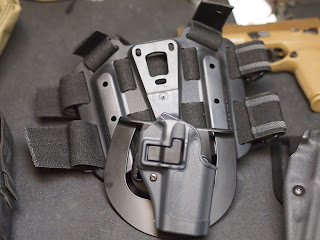 The next holster, a Blackhawk Serpa with Blackhawk Tactical Holster Platform (drop-leg adapter) was given to me by my buddy Alex.  I guess he bought it and didn't really use it before upgrading to something else. 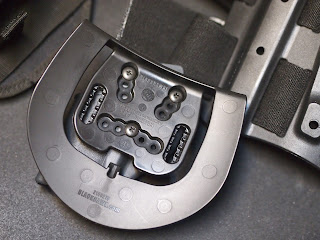 Since I got it from a buddy, I have no idea what comes in a new package.  This one appears to be their Serpa Sportser Holster meant for conceal carry or range use, to be worn in outside the waistband (OWB). 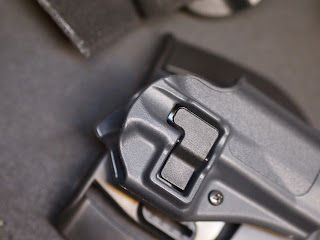 Before I read any reviews on this holster, I noted that it was made of decent construction, seemed pretty solid and the mechanism appeared to function well, but I had concerns about the location of the retention release and using my trigger finger to activate it.  When the pistol is released, my trigger finger would be in a natural position just above the trigger housing, however I could see that with sloppy handling, bad things could happen.

One of my other pals told me to take this holster and chuck it in a lake.  Others started chiming in saying that if I didn't want to shoot my leg, I better steer clear of this holster.  So I did some reading and found quite a few articles about the Tex Grebner incident back in July of 2011.  There were also a lot of concerns about the mechanism easily fouling up with sand, dirt or even snow.

That being said, however, it was still adopted for some military use.  Blackhawk has apparently redesigned their retention system to use the thumb instead of the trigger finger, but I haven't taken the time to read up on it yet.  See Military Times for an article about the new T-series. 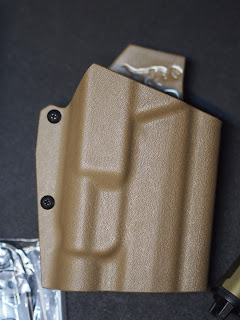 The T-Rex Arms Ragnarok Holster.  The Ragnarok is passive retention holster (no hood, strap, button, switch) to keep the pistol in, just friction and a retention adjustment screw. 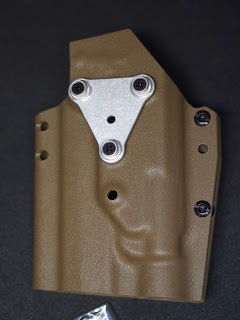 The G-Code RTI hanger.  I got the G-Code RTI Hanger as was suggested by my pals which quick attaches/detaches to the molle adapter that I have on my belt. 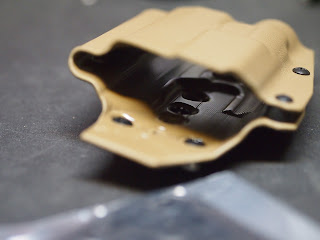 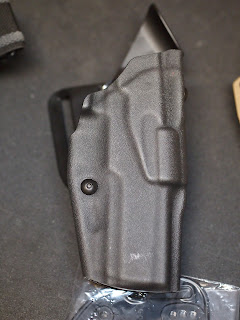 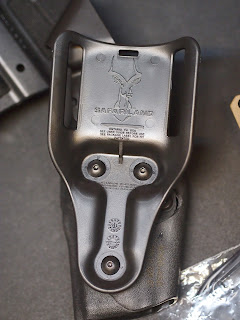 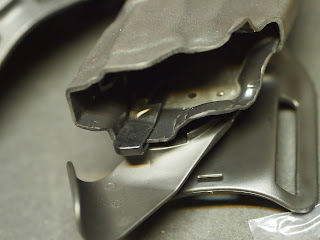 To release the pistol from the holster, I need to engage the thumb lever.  The person I bought this holster from described it as a Level II retention holster, but honestly, I had no idea what the difference was between retention levels and had to look it up.  Here are the Cole's notes:

A Level I holster only has passive retention, basically friction is the only thing that keeps the pistol in the holster.

A Level II holster has the same friction element as a Level I with the addition of an active mechanism such as a hood, back strap, finger or thumb operated lever.  More on understanding holster retention here.

It appears to me that this holster meets the definition of Level II retention, simply because it goes beyond simple friction?  The mechanism in my holster doesn't look like the Model 6006 ALS Guard, but maybe Safariland has it's own definition of what's Level I and Level II.

Model number 6360-450-131 was printed on the package, and I found it for sale here.  When I read Safariland's website, it says that this model can be upgraded to Level II.

I've also been reading up about guys running a low ride belt loop: 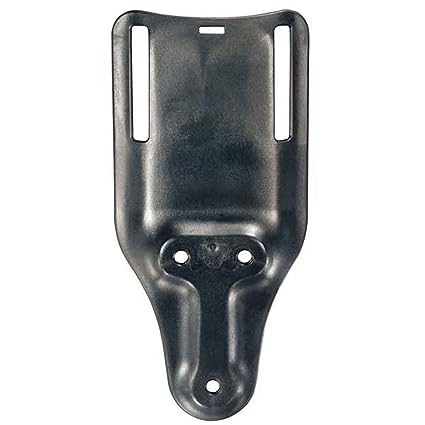 This one offers a lower draw height than the mid-ride, but not quite as low as Han Solo.  Then what they do is they loop a single strap like this instead of getting a thigh rig with double straps.: 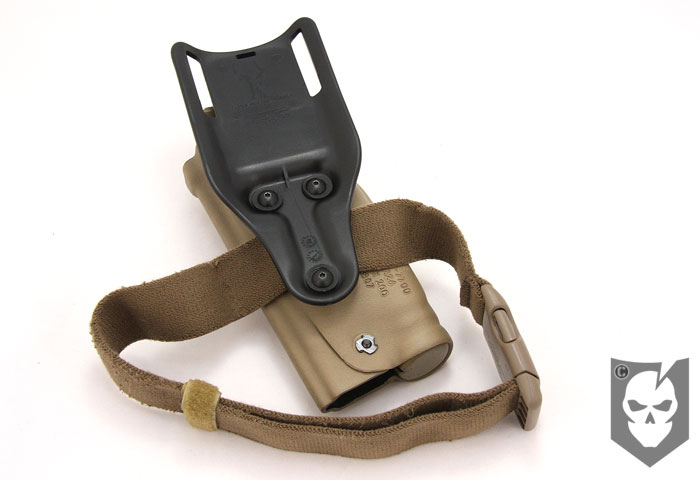 Anyway, I'll have to muck around with this thing while my pistol is dry so I don't end up punch a hole in my leg.