I went to the range last night to try out a few new goodies.  First was the new Competition Match Hammer & Sear kit that I installed in the 10/22 a while back, next was the Winchester Hollow Point 36 grain, 1280fps, copper plated .22lr 555pk I picked up (cheap at $23), and lastly my new Norinco 1911A1 Government with all my new goodies added on (should have tested it out stock before mods but too late now). 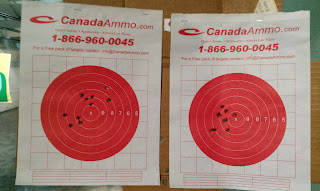 First up was the new Winchester ammo versus the Federal bulk stuff, also 36 grain, 1260 fps, also copper plated hollow points, but 525 for about $29 at Canadian Tire.  I shot Federal out of my GSG 1911 Tactical first from a standing position, unsupported from about 5 meters (Yeah, I know, I'm a crap shot) and you can sort of get the idea that the Federal (right side target) held a tighter grouping than the Winchester (left side target). 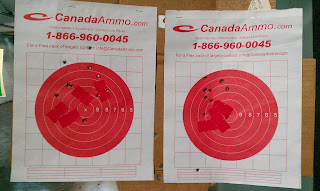 I backed it off to 10 meters and my groupings got progressively worse, but still, the Federal (right side target) looked like it held together a bit better than Winchester (left side target).  I'd also like to note that the Winchester had a few failure to feed, and I got one dud.  The Federal loaded fine, and there were no duds. 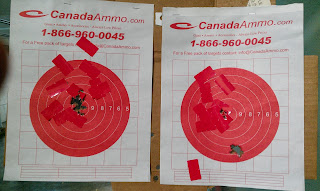 So my pistol work needs more attention, so to get a little confidence, I switched over to my Ruger 10/22 (buried in the Archangel Marauder stock kit) and kept the target sheet out at 15I  meters.  Unfortunately, my red dot crapped out on me (after having the same battery in there for more than 7 years (got the red dot in Japan 7 years ago for my airsoft gun, never played, haha!).  Anyway, I mucked around with the red dot for a bit, then ended up ripping it out and using the back up iron sights.  25 rounds for each target sheet and with the Federal (right side target), I ended up shooting through the same holes and with the Winchester (left side target) it was slightly sloppier.

In this test, I was also trying out the Competition Match Hammer & Sear kit that I installed in the 10/22 and I'm glad I got it.  It made for a llighter and smoother trigger pull compared to stock (and I've only taken my 10/22 to the range once before this trip).  The trigger reset was nice and crisp, which made for  nice follow up shots as well.  Before, the reset was a bit vague and it wasn't always a clean reset (or maybe I just needed to break it in), but with the new kit, there was no doubt and I was able to make those follow up shots without any doubt. 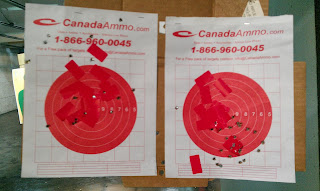 I tried a mag dump with the 10/22 from 15 meters, rapid rate of fire unsupported, and was able to get most rounds on the target sheet and though both sheets represent my sloppy marksmanship skills, you can sort of tell the Federal (right side targer) seemed to hang around the same area where the Winchester (left side sheet) walked all over the place. 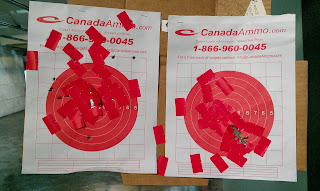 I pushed the target sheets to the back of the range (about 17 meters) and did a comparison of the Winchester ammo in my 10/22 (right side target) and the same ammo in my GSG 1911.  I guess it's a no brainer to say that the rifle was far more accurate than the pistol, but both are equally fun to shoot. 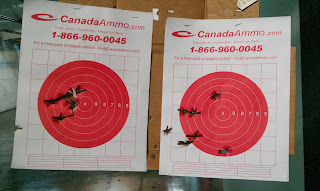 Next was my Norinco 1911A1 Government. Again, I should have shot the thing stock, but I hastily installed a bunch of stuff that I ordered before my gun even arrived.  Thankfully it all worked (some parts needed some serious massaging) out in the end and I didn't have the gun explode on me (Guess that's what the function test is for).  Anyway, at 10 meters out, the my first mag was a bit sloppy, but it didn't take long to get used to shooting it.  My second mag on the left (with the exception of the one flyer) is almost respectable.  My groupings improved throughout the night, and I was fairly happy with the Norc.

I'm kind of curious how it would perform without the "upgrades" I installed.  The trigger doesn't break as nice as it did when it was stock, and maybe it's because I'm using a straight out of the box Smith and Wesson hammer/strut assembly with the stock Norinco sear?  Also, I noticed that it takes more energy to rack the slide, and I wonder if this has to do with using the Springfield Armoury msh....it was definitely harder to put it back on......maybe I should have changed out some of the springs as well?  I guess it will need further tuning.  I might end up returning the gun to stock, or just get another one and keep it stock, and keep fiddling around with this one, haha! 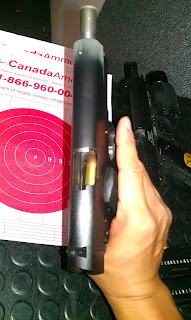 The Norinco mags I got were crap.  One of them would not feed properly if loaded with 7 rounds.  It fed fine with only 6 rounds, but that's kind silly.  The other mag did this intermittantly, but my Wilson Combat stainless steel mags fed flawlessly every single time. 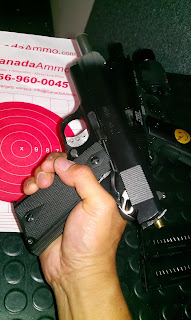 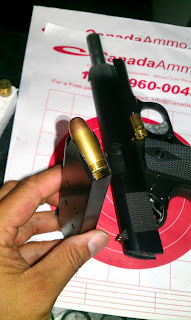 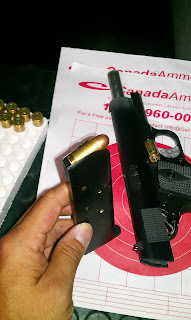 I wonder if it's worth going back to Canada Ammo and exchanging the mag, or not bother with it and get a few more Wilson Combat mags. 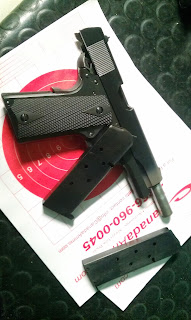 At the end of the day, I was really happy, almost giddy with my new Norinco 1911A1 Government that I got from the Canada Ammo deal - 1000 rounds and the pistol for $499.  It was definitely worth the price, because even though I sort of butchered the gun with my hokey install of after martet parts, it still performed well. But I might return the gun to stock since I didn't do anything permanent.

People say the ammo is loaded hot, and comes out hard, but most of my shooting experience has been with the Norinco ammo and I think I've only shot a few boxes of Blazer and Federal so I really can't compare the two.  ﻿

And as I menttioned before, I'm almost tempted to get another one since the stock appearance of the 1911A1 Government started to really grow on me. I like the modernized look of my Remington R1 Enhanced, with all the bells and whistles, but at the same time I like the classic look as well.....yeah, I'll probably end up getting another one, haha!

Regarding the Winchester ammo, well, it's okay to plink with, but I would say it isn't very reliable, or at least I wouldn't depend on it.  It's cheap enough, but after about 300 rounds in both the 10/22 and the GSG 1911, I was willing to cough up the extra $5 or whatever for the reliability and consistancy of the Federal.

And lastly, I'm more than satisfied with the Competition Match Hammer & Sear kit for my 10/22.  The stock one wasn't bad, and probably needed to be just broken in, but this kit provided a straight drop-in, buttery smooth trigger pull that's just light years ahead of the stock one.  Well worth the $$$.