What I really wanted was the Leupold Mark 4 MR/T 2.5-8x36mm for my Mk12 Mod 1 clone build however when these are actually available, they start at $1,800 and I've seen them go for as much as $2,200.  I thought that was a bit insane for that particular scope considering there are FAR better options for that kind of coin.

I really had to balance sanity with my current obsession with building a Mk12 Mod 1 clone, and ultimately decided to go with something that deviated quite a bit from what was considered acceptable with most clone builders.  I was actually shopping around for a Leupold Mark 4, even had a Mark 4 (though it was the 8.5-25x50mm) a while ago, but sold it in favour of something in first focal plane.  Anyways, I was holding out for a used Mk4, preferably beat up and cosmetically horrendous, but still functional.

My patience ran out after waiting about 10 minutes then I decided screw it, just going to get something that sort of fits a similar profile and the closest thing I could find that didn't cost the typical arm + leg Leupold pricing was the VX-R Patrol in 3-9x40mm. 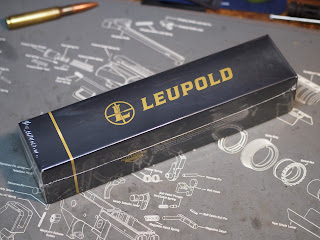 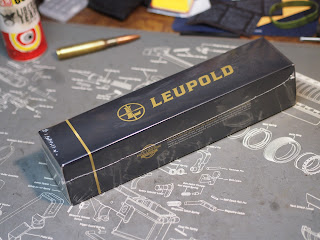 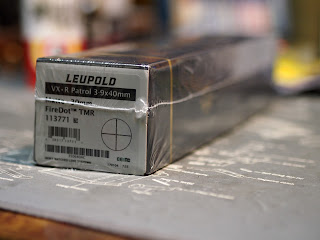 I read some reviews and watched a few videos and near as I can tell, there aren't any other reticle options for this mag range.  I've used the TMR reticle before and though it's simpler than what I've gotten used to (reticles like the Horus H59, the TReMoR 2, and Bushnell's G2DMR), it's better than the mildot in my opinion.  The first thing I noticed with the Patrol's TMR reticle however, was how much thicker the lines appeared compared to the one in my old Mark 4.  I'll have to see if this will drive me up the wall at further distances, but I don't see myself shooting this rifle beyond 300m.  Since this lovely build will fall into the Restricted category, I'll only be able to shoot this at a shooting range, and the furthest distance the closest range goes up to is 300, (or could yards, will have to check). 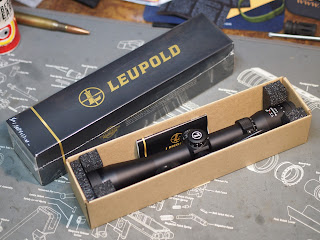 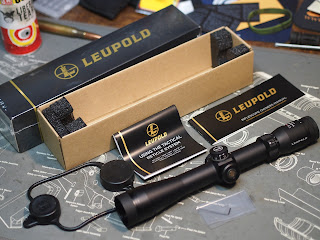 The scope came with the rubber bikini lens caps, an allen key, a battery, a Leupold sticker and instructions.  It was simple, but adequate packaging, and sort of reflects the price you pay, which really isn't much if you can find these on sale. 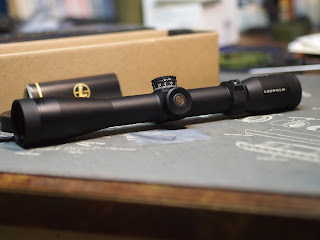 Not pictured here are the "made in" markings.  While this scope is definitely not made in China, the Philippines, Korea, or Viet Nam, it's not likely it's 100% made in the USA either.  I've read that some parts are sourced from overseas, hence the marking indicates it was assembled, not made, in the USA.  This could explain the lower price compared to it's more expensive Mark 4 brothers. 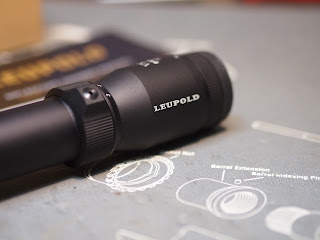 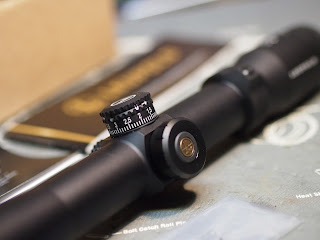 The Firedot is actually quite simple to use.  I borrowed a buddy's Mark AR 1.5-4x20mm a while ago, but didn't spend a lot of time playing with it and never quite figured out the push-button switch to turn the dot on and off.  It actually is quite simple though, in that you push it once to turn it on, push it again as many times as you need to in order to adjust the brightness, and push and hold to turn it off. 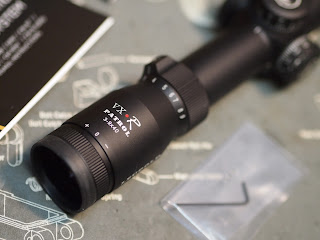 I would have preferred to have more subdued markings on this scope, but again, this will be a range toy for me and I probably won't be taking it out on night patrols. 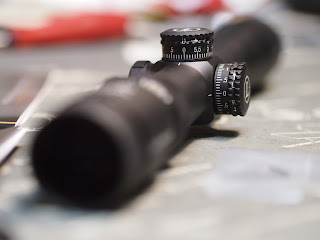 The dials are not crisp like some of my other scopes.  In fact, you could say that they are bordering on mushy, but manageable.  I do however like the fact that they are in mils and not MOA like the Mark 4 which I wanted for the clone build.  This may actually be a good scope for my non-restricted ACR, when plinking at 250m+ is called for and I actually want to dial instead of holding over.  It still doesn't make a lot of sense to me that some rifle scopes come with mil-based reticles, but MOA adjustments.  I've also found that when shooting with others, it helps if everyone is on the same page.  If you splash 3 mils right, and you have to make your adjustments in MOA, it can be a bit of a pain doing the conversion in your head.

Overall, I'm pretty happy with the Patrol as it sits on my desk.  The finish is nice, as one would typically expect from Leupold, and the quality of the glass is bright and clear from edge to edge.  The eye relief is quite significant and very forgiving, and when you're looking through it, the scope body is barely visible, as if  the sight picture is just floating in the air like a heads up display.  This should come in handy for faster target acquisition.  The reticle is in mils and the adjustments are too, which is a HUGE plus for me.  Lastly, the price wasn't horrendous.  Though the Patrol does not have the field-tested reputation of the Mark 4 line, it should be more than adequate for one-way range use and maybe even competitions.

That being said, I won't truly really know if I like it until I take it out to try out.  It will probably have more time with my ACR than my Mk12 Clone, but at least with the ACR, it will see targets beyond 300m.   Looking forward to taking this scope for a test drive.