After reading through this thread, I got a little curious: 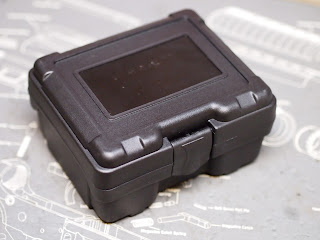 I don't know a lot about Trijicon ACOGs, but I do know they cost a lot more than I'd like to pay, and they seem to hold their value quite well.  I've heard about the crystal clear glass, but I've also heard about the craptacular eye-relief (a trait shared with another high end mil optic - Elcan).

So I happened to stumble on this thread on AR15.com that seemed to have a few good things about these fakes, which really surprised me.  I've had fake optics, but I haven't consciously bought any since I first started getting into firearms.  All of the ones I've ever had rattled apart, both internally and externally, and just couldn't handle the recoil of a real firearm.  These were toys, meant for Airsoft rifles, and had no place on real firearms.

But when I read about these fake ACOGs, many were citing they were able to hold up.  There was even a youtube video of a guy trying his fake ACOG on a shotgun.  I thought my M16A4 clone could use an alternative to the carry handle (though I really like the look of the carry handle), so I figured for $60 USD, let's give it a try.  Besides, if shit hit the fan, the M16 clone would probably not be the first rifle I'd grab and depend my life on.  I got it as a novelty because I don't see myself ever coughing up coin for a real one (my real Elcan was already a hard pill to swallow for such low magnification).  This would be used for plinking at the range until it implodes. 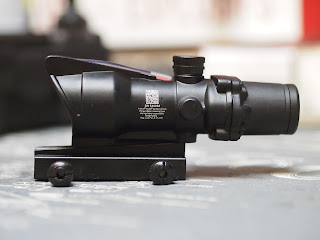 There are markings on the body of the scope, but even though I don't own a real ACOG, I can tell these markings aren't authentic.  The QR code seen on many scopes and firearms just doesn't look right. 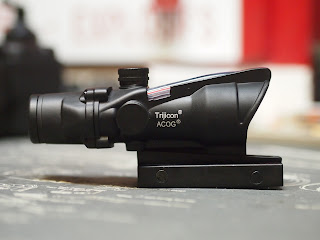 I've also seen a few real ACOGs to remember that the works "Trijicon ACOG" were embossed on the side, not printed in bright white, however I could be wrong and maybe there are models that look like this. 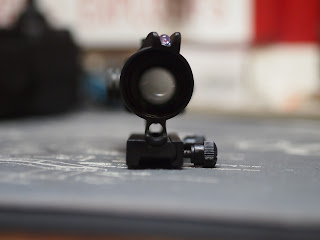 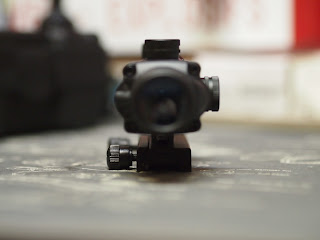 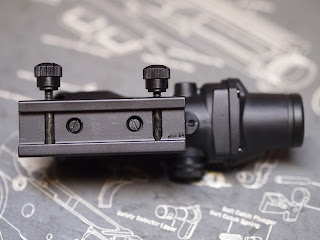 At a quick glance, the fake doesn't look too bad, and even has some heft to it, however flip it upside down and I confirmed there was no way this could be a serious substitute for the real deal.  The base consists of two screws, but one of the screws was drilled into the base incorrectly and is too recessed into the base to catch the rail. 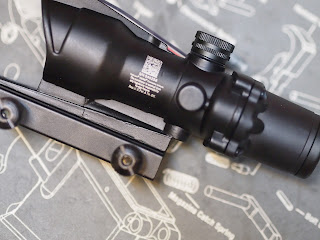 On closer inspection, you can seen imperfections in the metal underneath the paint, which could be casting anomalies. 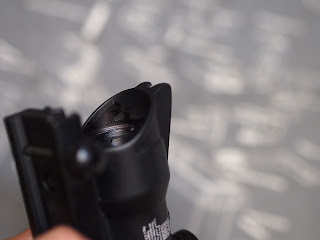 You can also see where the worker who assembled this thing painted the inside of the tube, maybe it was glue or weather proofing to seal the glass. 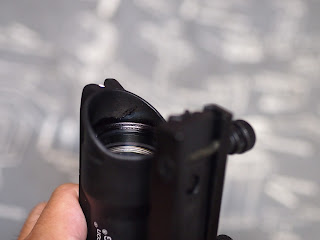 The glue/paint goes all around where the glass meets the body of the scope. 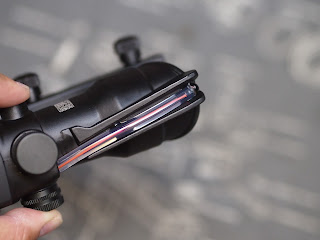 You can also see the two points where they glued down the fibre optic. 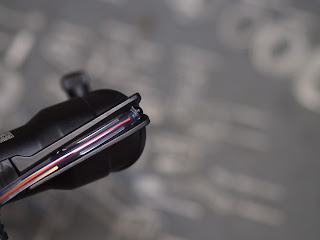 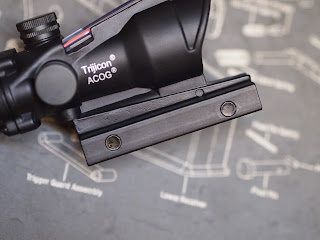 More imperfections visible in the metal underneath the paint. 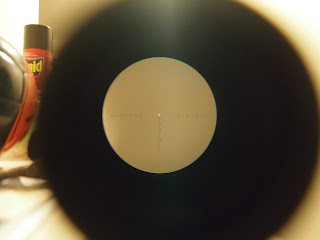 Surprisingly, the glass was pretty clear, the reticle was crisp, and the red chevron was nice and bright.  Being completely unfamiliar with ACOGs, I first thought the thing was shipped with the illuminated reticle lit, only to realize there was no battery powered illumination, it was just a really bright fibre optic.  I'm not sure I'd trust the bullet drop numbers printed in that reticle though. 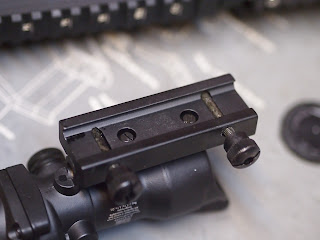 Here you can see where one screw is recessed and completely useless on your rails. 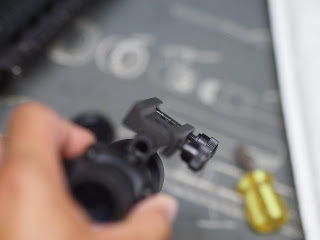 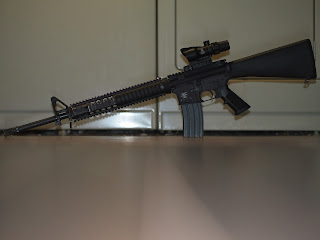 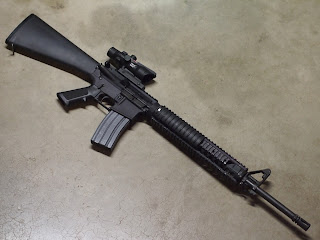 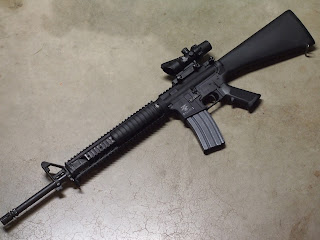 Anyway, the thing looks good on my M16A4 clone...from a distance.  I don't think I'd ever use this beyond plinking at the range.  Shortly after I took these photos, I took the thing off and ended up putting the carry handle back on.  I might just set this fake ACOG aside and use it if I ever build an M4 clone with a dedicated .22lr upper.